During my 2nd trip to DC this year...I found the solution to our country's problems!

During my 2nd trip to DC this year...I found the solution to our country's' problems! The National Liberty Party! Please visit them at NationalLibertyParty.org and decide for yourself!

California and Its Sorry State of Affairs, and the Coming Story for Many Other States in America

Below is a posting on Forbes.com by Joel Klotkin which very adequately describes California's plight and the coming plight of many other liberal states in the U.S.

If we do not act at the grass roots level, city councils, state legislatures, etc., many other states will find themselves in the same economic condition of California.

You don't have to be a genius, or a conservative, to recognize that California's experiment with ultra-progressive politics has… Continue

My retired police officer pal forwarded me a very interesting piece with respect to a talk given by Charles Krautheimer, a contributor to Fox News. Point 11 is most instructive and is certainly worrisome. The text reads as follows:

Krauthammer is on Fox News. He is an M.D. and a lawyer and is paralyzed from the neck down. A friend went to hear Charles Krauthammer. He listened with 25 others in a closed room. What he says here, is… Continue

A pal of mine, a wonderful retired New York City Policeman, forwarded the following to me via e-mail which is of interest when looking into the Arena of Corruption. Do you remember the small amount of hoopla which erupted over the University of Chicago Medical Center's wage increase for "The One's" significant other? Ohhh...but she's IRREPLACEABLE! She's doing such a FINE job!

What is going on in the G20 Summit

Have you seen the dictators at the Summit? How stupid does he think we are. If this bunch of corrupt dictators have anything to do with our policy we are in deep ___. Obama is talking about the IMF, this is a corrupt bank that our Congress gave a couple of billion of dollars to. They pretend they are loaning money to countries that need help. What they are doing is loaning money to corrupt leaders. When they can't pay the money back, they tax the people and their standard of living goes down.… Continue

I believe these rallies are the tip of the sword. We must not stop. We must not tarry, for every person that went to Washington DC there must have been 3-4 people back home who’s comments were that they are proud and thankful that we all went. We can not let the voice for freedom stop in the halls of the United States; they have turned up the speed on the economy and they are waiting for the system to break, so they can rescue us with limitation on our Rights.
Thirty day increments should… Continue

PLEASE Spread the Word... If you can answer Yes to 1, 2 or all 3 questions in this photo, please JOIN US! 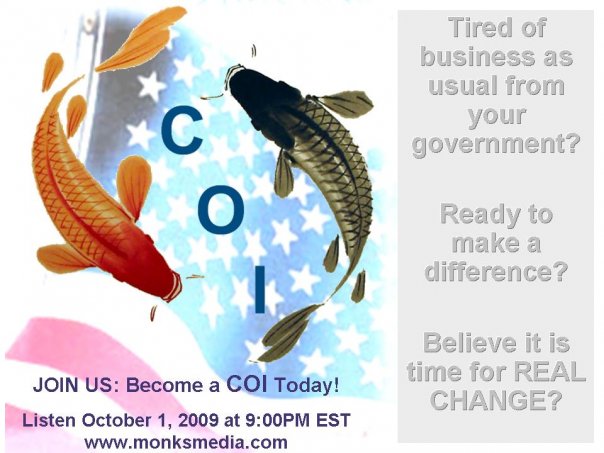 Thank You, Senator Charles Schumer (D, NY) for Your Heads-up Negation of the Flatulence Tax

A first has been reached.... Chuckie has decided that taxing the flatulence of cows and hogs would NOT be a good idea! YIPPEE! What a guy! What a legislator! What a genius!

The proposed tax? $175 per cow and $87.50 per hog per year. Now, the flatulent emissions would not have to be counted as they entered the atmosphere...we wouldn't want to strain the federal government's burgeoning workforce with such a task. No, each farmer and rancher would have had a tax placed upon their… Continue

IT'S UP TO US TO KEEP OUR SHERIFF'S PHONE NUMBER HANDY

Unemployment -- the Full Story the Government Will Not Report

John Maudlin from InvestorsInsight.com puts out a wonderful posting about various and sundry financial matters affecting this country. I have replicated w rew paragraphs which I found instructive and provide some facts about the REAL unemployment numbers in America:

First, the unemployment rate is now officially at 9.7%. We are approaching the official high we last saw at the end of the double-dip1982 recession. In the chart below, notice that unemployment rose… Continue

G-20 SUMMIT RIOTS AND KIDNAPPING OF A PROTESTER

Pentagon Seeks Authority to Post 379000 Troops in U.S.
"KIDNAPPING OF A PROTESTER, THEY TEAR UP IN A UNMARKED CAR AND BUNDLE A PROTESTER IN AND ZOOM OFF!"
DEATH OF THE US DOLLAR WITH THE SDR. IMF SDR BONDS BEING BOUGHT BY CHINA, AS THEY SELL THEIR T-BILLS. AND NEW GLOBAL… Continue

I'm planning to move my family and extended family into Mexico for my health, and I would like to ask you to assist me. We're planning to simply walk across the border from the U.S. into Mexico , and we'll need your help to make a few arrangements. We plan to skip all the legal stuff like visas, passports, immigration quotas and laws. I'm sure they handle those things the same way you do here. So, would… Continue

I'm heading in a new direction...please FOLLOW ME to a better country!

I have been promoting the phrase "I didn't vote for this Obamanation" as a way to get people to unite in one voice. I have had good results, but during my second trip to Washington, D. C. this year, I met up with some people who were on the same path, but way ahead of me and in larger numbers. I met the leaders of both "TheNational912Project.org" and "NationalLibertyParty.org". The National 912 Project people were also uniting people and actually led me to the National Liberty Party! We all… Continue

The Land of Obama: The Python which Is Sucking the Life Out of Us All...

Well, the beat goes on. We've seen the displays at the U.N. this week and it's so sickening it makes you want to leave the room to get away from the television. I suspect some of us just want to throw the TV out the window! On the domestic front, we're heading to a mighty bleak future vis-a-vis the safety of this country and the safety net of our retirement, and the safety of our welfare. Obama's lies are so legion, we must have been hearing things!

The president apologizes to the U.N. for America ,to a bunch of punk Dictators,how could you allow this to happen????From: savard chris
View Contact
To: senator@stabenow.senate.gov
Cc: senator_levin@levin.senate.gov

This president and the Congress you do not speak for me that is for sure.Your all violating your oaths of office,and I am not even talking about your tyrannical legislation you are considering all based on lies,,Climate change,Bank Bailouts ,Health… Continue

The Conservative Revolution and Its Myriad Supporters

As time marches on, as TARP fails, as healthcare comes to the fore on the floor of the Congress, as we are told we will NOT be able to see certain bills posted on the Internet, as more and more money is spent by the government on various and sundry projects which make no sense in these economic times, as the voting on Cap & Trade nears, as we see so many of our rights under the Bill of Rights and the Constitution fly away into outer space, I'm feeling not only weary, weepy, and… Continue

Here is a wonderful quote from Rush Limbaugh on his radio program which a pal sent me via e-mail:

"Obama's health care plan will be written by a committee whose head, John Conyers, says he doesn't understand it. It'll be passed by Congress that has not read it, signed by a president who smokes, funded by a Treasury chief who didn't pay his taxes, overseen by a Surgeon General who is obese, and financed by a country that's nearly broke. What could possibly go wrong?"

The Second American Revolution will not be Violent!

A very interesting Rasmussen poll was released today. The headline reads, “66% ANGRY AT GOVERNMENT POLICIES, 60% SAY NEITHER PARTY HAS ANSWERS.”

Who are these angry people? According to Rasmussen they are 90% of the Republicans, 44% of the Democrats and 77% of the Independents.

Wow. How can this be? Nancy Pelosi assures us that it is only a vocal minority who show up at Tea Parties and Town Hall meetings and… Continue