Bunker Biden is the ultimate Empty Suit. Stumbling and mumbling his way through a Presidential campaign, Joe’s withered brain is the stuff of unsavory legends- a massive threat to national security should that decaying cranium ever find its way back to the White House. Without a teleprompter, Joe is pathetically incoherent and incapable of effective communication. The Democrats are well aware- but “Deer in the Headlights” Joe is all they have to hold down the fort until their convention.

My comments yesterday: “I just listened to Sleepy Joe as he pontificated in front of an American Flag ostensibly from Darby, Pennsylvania- and from an otherwise empty room, judging from the slight echo and an astonishing lack of other sounds. Other than that, Joe criticized the President in fine style- except that Bunker Biden apparently ended the low-energy session with slightly delayed canned applause. Without a teleprompter, the presentation would have been painful- not simply boring.”

Meanwhile, the country is still under siege by leftist idiots who want to defund or even disband our police departments. These anarchists are devouring wolves in sheep’s clothing- ginning up sympathy for common street criminals who would rather terrorize, riot and loot than pursue gainful employment. These clueless “reformers” would have Antifa answering your 911 calls.

The anarchist vision for the future of America holds only their broken promises and your broken dreams.

Moreover, if the Leftist Elite succeeds in drastically reducing police protection for America's commoners, you can bet private security guards are ready and waiting to protect the treasonous wealthy.

By the way, under Georgia law, a Taser is a lethal weapon. That’s the extent of my comment on the death of Rayshard Brooks- except to report that Fulton County Prosecutor Paul L Howard is being investigated for funneling at least $140,000 of Atlanta’s public money into his personal “piggy bank.”

“Over the past decade, Fulton County District Attorney Paul Howard has headed a nonprofit with a laudable mission: reduce youth violence.

But Howard has used the nonprofit, People Partnering for Progress, as a conduit to receive tens of thousands of dollars to supplement the six-figure salary he gets from the state and county for being district attorney, an investigation by The Atlanta Journal-Constitution and Channel 2 Action News has found.

PPP mentors students, augments a program that sends prosecutors out into the community and helps the DA’s office combat gang violence. From 2015 through 2017, the nonprofit paid Howard $140,000 in salary, according to its filings with the IRS. His biggest payday came in 2017 when he took in $70,000, the tax records show.”

"At the request of the Attorney General’s Office, the GBI is conducting a criminal investigation into allegations against DA Paul Howard," GBI spokeswoman Nelly Miles told GPB News.

The allegations stem from reporting by The Atlanta Journal-Constitution and Channel 2 Action News about discrepancies between financial disclosures Howard filed with the state and tax filings submitted to the IRS by the nonprofit he heads as CEO.

Howard, who has been the DA since 1997, is also facing allegations of sexual abuse and a state ethics complaint, the newspaper reported.”

Then we have John Bolton fanning the flames of America’s current civil war. In case you haven’t noticed, John is a little man with a gigantic ego. I was never fond of him as a “Fox News Contributor.” My personal opinion of President Trump’s former National Security Advisor has ramped downward from “never fond of” to regarding him as a treasonous creep who sold out his country for biting revenge against the Trumpster- and monetary gain for himself.

Wanna know what I really think? 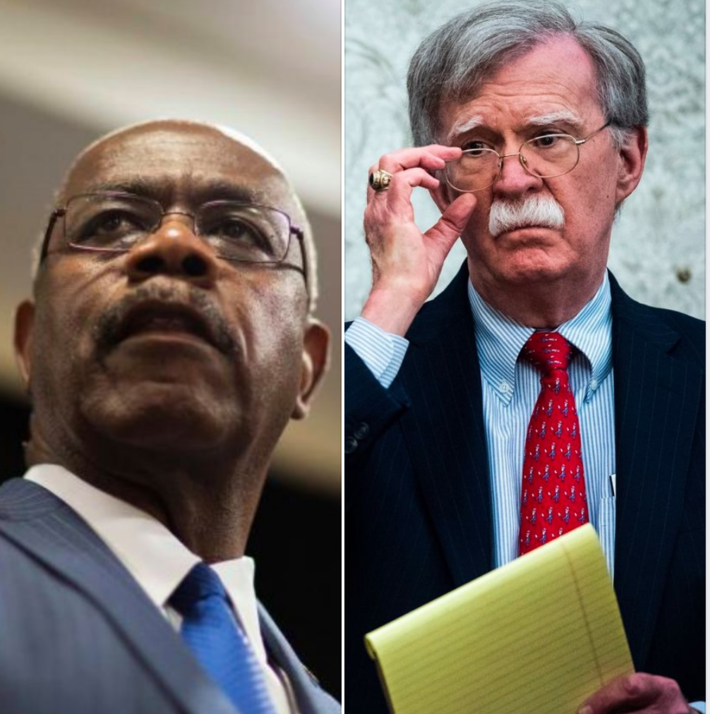 Wow, Dickie! What DO you really think?