MAYOR BLOOMBERG'S "MOMENT OF SILENCE" for 911 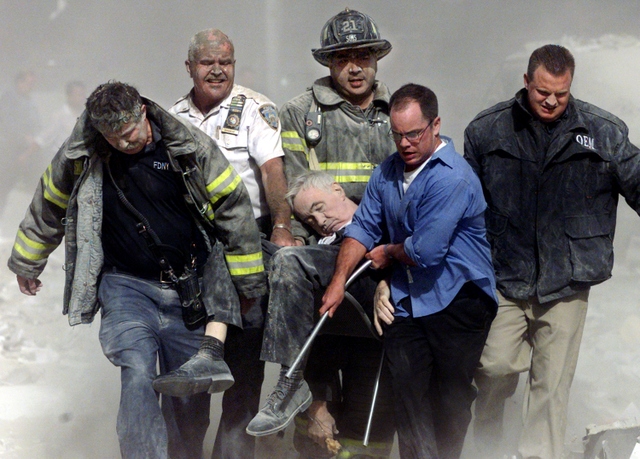 And now we read,  that Mayor Bloomberg’s guest list is empty of any clergy, as well.

There will be no prayers at his little shindig.

Apparently, there’s just not enough room for all the First Responders who want to be there, because there are so many important people who must be there! They cannot be denied their photo-op, and their speechifying, and their postures and poses, even though most of them were not even in office on that dreadful day.

No, Michael Bloomberg’s Super Colossal, Low-Salt 9/11 Memorial and Networking Event is a big-ticket item for the the ones who can be tapped, later, for their money or their influence — the most important sorts of people.

And of course, some of the families of the dead will be allowed in. One does need them for the pictures, after all.

First Responders and Clergyfolk are not very important to the powerful and the enlightened. Those heros only protect us, rescue us, resuscitate us, console us, pray with us, bless us and bury us. And when they die doing it, well, one does feel terrible about it for a whole news cycle or two. And then one takes a private jet somewhere, and tries to forget…

But don't  be surprised. Priests and First Responders are, like our troops, front-line folk. They’re like heroes in the cowboy flicks; they ride in, shoulder the burden, help put things to rights, and then — while the elite get on with assuming their power and asserting their primacy –they recede into the background. Only the very few stick around to say ‘thank you’ and wave them off. Sometimes children ask them to come back, or to stay.

APOLOGIES IN ADVANCE, BUT SOMEHOW I KNEW

IT WOULD EVENTUALLY RESULT

IN THIS POLITICALLY CORRECT

...WHEN THIS WAS WRITTEN: is the third part

﻿of the following tribute

We are ALL going to die one day and only God knows which day that will be. Do we only turn to Him when we think "THIS IS IT???"

The fear of the LORD is the beginning of wisdom: and the knowledge of the holy is understanding. Proverbs 9:10

of the LORD
Yhovah  (yeh-ho-vaw')
(the) self-Existent or Eternal; Jehovah, Jewish national name of God -- Jehovah, the Lord.

of the holy
qadowsh  (kaw-doshe')
sacred (ceremonially or morally); (as noun) God (by eminence), an angel, a saint, a sanctuary -- holy (One), saint.

That, Nelda, is Unconstitutional!!!!! The First Amendment prohibits government from establishing a state religion. Since the ONLY religion he is promoting is Islam, he is violating the United States Constitution.

I'm so glad that we all express ourselves so vehemently HERE instead of actually GOING to New York and standing UP to this idiot!

Has it occurred to anyone else here that WE ARE A PART OF THE PROBLEM????????

Comment by nelda moore on September 6, 2011 at 9:46pm
Bloomberg signed a law forcing more religion in the work place...It favors Muslims and will Islamize workplaces in New York city....I never thought I would live this long to see this happen in America! God will not bless our country if are ashamed to call upon his name.....

I hope he is tossed out of his job when the time comes... I also hope people that go start all together with the Lord's Prayer or God Bless America.   They should have all religions there and a few minute prayer from each! He is UN-American and things he is king just like our DC critters.

When the righteous are in authority, the people rejoice: but when the wicked beareth rule, the people mourn.

It is a sad commentary indeed, when a nation is forbidden to pray at a moment when prayer is the only avenue to understanding the trials we are going through. Especially when that nation is the ONE nation in the history of this third rock from the sun to have been established in God's Name, under God's Laws.

Gordon, you shared the story of the Washington Monument and it's dedication Laus Deo......"Praise God". There are references to our Creator ALL OVER THE CAPITAL CITY of this "One Nation, UNDER GOD".....we are also meant to be "INDIVISABLE" but the evil that is trying to destroy us has been hard at work trying to divide us into small, weak, dependent groups who will cower and beg the support of the clenched fist of Communism.......a Godless, hopeless, lifeless, UNSUSTAINABLE system that has failed everywhere it has been attempted.

Then there are US. We who believe in the Constitution, the rule of law, the Lord God and the power of a free American People to overcome any challenge that anyone tries to put up against us.

I honestly wish I had a magical answer but I don't. What I DO know it that if you don't stand up to a BULLY he will always win. I, for one, am not ready to concede my liberty to a bunch of Marxist Idiologues who have never held a REAL job in their lives, These people have sat around faculty lounges and theorized so much it would have made my eyes bleed! NONE OF THEM HAS EVER HAD TO PROVE ANY OF THEIR Bullsh-t theories [avery good thing for them because they would also be unemployed!!!!!!!!]

Is anyone else even thinking about heading to NYC and PRAYING???????????? It is really a very small gesture considering what the people in those towers went through ten years ago, not to mention the police and fire fighters who ran INTO those buildings when everyone else was running OUT!

It's easy to sit in the security of our homes and preach away but how many of us are willing to actually STEP UP AND PRAY TO THE LORD, OUR GOD, for forgiveness, guidence and grace? Those who died that beautiful September day in 2001 are surely resting in the arms of the Lord. We need to ask for help for those of us left behind, for guidence back to the path of truth and light and the grace to bear whatever pennance is necessary for having turned away from the rightious ways of the Lord and His Commandments.

The Mayor said there wouldn't be "enough room" for the clergy and those who wish to pray........ REALLY!?!?!?!? Is there anyone else out there who disagrees with hizhonor???? We don't even really need a "leader', just someone with a Bullhorn and a bunch os sheets printed with the words of songs [hymns] everyone knows.....[I'll be happy to donate]..........anybody????? Richard, bring your guitar!!!

Comment by Gordon Ray Kissinger on September 3, 2011 at 5:26pm
The Bible Contains:
The mind of God, the state of man, the way of salvation, the doom of sinners, and the happiness of believers. It's doctrines are holy, it's precepts are binding, it's histories are true, and it's decisions are immutable. Read it to be wise, believe it to be safe and practice it to be holy. It contains a light to direct you, food to support you, and comfort to cheer you. It is the travelers map, the pilgrims staff, the pilots compass, and the soldier's sword, and the Christians charter.
﻿Where paradise is restored , Heaven opened, and the gates of hell disclosed. Christ is it's grand subject, our good it's design, and the glory of God it's end. It should fill the memory, rule the heart, and guide the feet. Read it slowly, frequently and prayerfully. It is a mind of wealth, a paradise of glory and a river of pleasure. It is given to you in life, will be open at judgment, and be remembered forever. It involves the highest responsibility, rewards the greatest labor, and condemns all who trifle with it's holy contents

Those that choose to deny The LORD

﻿willingly stand on The Left.

﻿Their will, and not God's