How far will liberal progressive democrats divide our nation before they totally separate it into war torn parts?

(CNN)A man shot a uniformed sheriff's deputy "execution-style" while he fueled his patrol car in the Houston area, killing him instantly, authorities said.

The gunman walked up from behind him and opened fire for no apparent reason, Harris County Sheriff Ron Hickman said.

When Goforth fell to the ground, the gunman stood over him and shot him some more, authorities said. He died at the scene.

"He was literally gunned down in what appears to be an unprovoked, execution-style killing," Hickman said. "I have been in law enforcement for 45 years, I have never seen anything this cold-blooded." 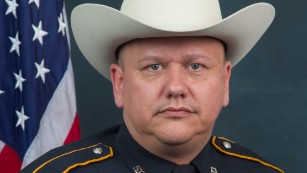 A man gunned down Darren H. Goforth, 47, as he returned to his patrol car after pumping gas

'He did not say anything'

The gunman gave no indication of his motive. He drove away after the shooting in a red Ford Ranger, authorities said. A manhunt is underway to find him.

"He (the suspect) did not say anything," said Deputy Thomas Gilliland, a spokesman for the sheriff's office. "If anyone saw anything ... any leads we can get."

Gilliland declined to name the suspect, saying they are still going over video from the gas station.

Authorities urged any witnesses in the area to come forward, saying some bystanders called 911 to report the shooting.

About 30 minutes before the shooting, Goforth had investigated an accident, but authorities said it's unclear whether there was a connection to the attack.

A father of two

Goforth was a married father of two.

"Our hearts go out to them," Hickman said, asking the community to remember his family in prayer.

"In times like these, it's important to ask for the prayers from this community," he said. " ... It strikes us in the heart to simply be a target because you are wearing a badge."

As the manhunt continued overnight, Hickman vowed the suspect will be held accountable.

"We will hunt this person down and do our best to bring this person to justice," he said.

After the news conference, he led a group of law enforcement officials in prayer, their heads bowed solemnly.

Tonight we lost one of our brothers. This is an extremely difficult time right now for the Harris County Sheriff's Office. #ThinBlueLine

"Black Lives Matter" agent on his way to execution of Deputy Sheriff.

THIS IS EXCTLY WHAT THE DEMOCRATS WANT, KILL OFF THE GOOD FOLKS THAT DON'T VOTE FOR THEM.  THE "BLM'S" HAVE ALWAYS BEEN DUMMY'D DOWN BY THEM AND WILL ALWAYS BE THEIR SLAVES.