then come back here and

Stefan Halper Agent Provocateur – In His Own Words…

Stefan Halper has been identified and confirmed as the intelligence informant used by President Obama’s CIA and FBI to engage in contact with low level Trump campaign officials during their efforts to conduct a counterintelligence operation against the candidate.

The joint CIA and FBI operation was code-named “Crossfire Hurricane“.

Rather ironically, five days before the 2016 election intelligence agent provocateur Stefan Halper gave an interview to Sputnik News where he outlined his agenda; in hindsight the aggregate agenda of the Obama administration:

“I believe [Hillary] Clinton would be best for US-UK relations and for relations with the European Union. Clinton is well-known, deeply experienced and predictable. US-UK relations will remain steady regardless of the winner although Clinton will be less disruptive over time.”  ~ Stefan Halper

2016 was not CIA/FBI Agent Halper’s first endeavor into manipulating the outcomes of U.S. political elections.  Indeed manipulating elections it is a specific skill-set within hiscurriculum vitae.   As noted in a New York Times article 35-years ago:

1983 – […] An operation to collect inside information on Carter Administration foreign policy was run in Ronald Reagan’s campaign headquarters in the 1980 Presidential campaign. […]  it involved a number of retired Central Intelligence Agency officials and was highly secretive.

The sources identified Stefan A. Halper, a campaign aide involved in providing 24-hour news updates and policy ideas to the traveling Reagan party, as the person in charge.

[…]  Speaking of Mr. Halper, David Prosperi, a Reagan campaign aide, now with the Superior Oil Company, said, ”He provided us with wire stories and Carter speeches, but people talked about his having a network that was keeping track of things inside the Government, mostly in relation to the October surprise.”  (read more)

Some terrific background research on Stefan Halper was done long before mainstream media picked up on his role as FBI Agent Provocateur.  Two months ago a Twitter Thread by TheWarEconomy outlined the scale of Agent Halper’s work weaving intelligence operations and U.S. politics into a deep state career. Including:

♦Agent Halper worked as a legislative assistant to Senator William Roth of Delaware holding this position from 1977 to 1979.  Because Halper was working with Senator Roth, he also became a Special Counsel to the United States Congress’ Joint Economic Committee. (link)

♦Agent Halper’s former father-in-law was Ray Cline, who was the Deputy Director of the Central Intelligence Agency. (link)  As Chairman of Palmer National Bank, Agent Halper  made loans to customs who then used it to channel the money to a Swiss bank account controlled by Colonel Oliver North, who then used the same bank account to provide military assistance to the contras. (link)

♦Agent Halper was on the Board of Directors at the National Intelligence Study Center, alongside his father-in-law and CIA Director Ray Cline, in 1983.  (link)  Agent Halper and his team of Central Intelligence Agency people during the Reagan / Bush ticket actually collected inside information on the Carter Administration’s foreign policy – with Halper in charge. (link)

“A nation can survive its fools, and even the ambitious. But it cannot survive treason from within. An enemy at the gates is less formidable, for he is known and carries his banner openly. But the traitor moves amongst those within the gate freely, his sly whispers rustling through all the alleys, heard in the very halls of government itself.”

“For the traitor appears not a traitor; he speaks in accents familiar to his victims, and he wears their face and their arguments, he appeals to the baseness that lies deep in the hearts of all men. He rots the soul of a nation, he works secretly and unknown in the night to undermine the pillars of the city, he infects the body politic so that it can no longer resist. A murderer is less to fear.”  ~ Marcus Tullius Cicero


About That FBI ‘Source’

Did the bureau engage in outright spying against the 2016 Trump campaign? 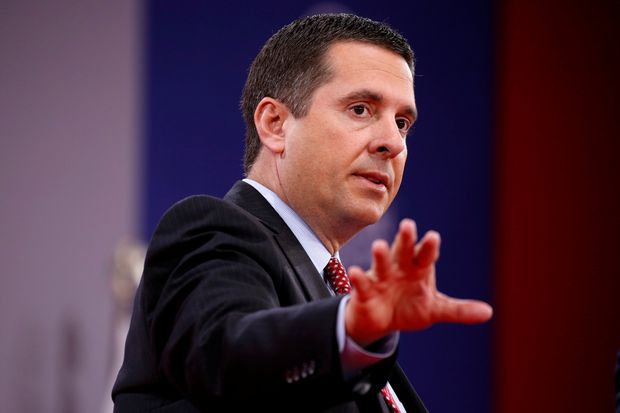 The Department of Justice lost its latest battle with Congress Thursday when it agreed to brief House Intelligence Committee members about a top-secret intelligence source that was part of the FBI’s investigation of the Trump campaign. Even without official confirmation of that source’s name, the news so far holds some stunning implications.

Among them is that the Justice Department and Federal Bureau of Investigation outright hid critical information from a congressional investigation. In a Thursday press conference, Speaker Paul Ryan bluntly noted that Intelligence Chairman Devin Nunes’s request for details on this secret source was “wholly appropriate,” “completely within the scope” of the committee’s long-running FBI investigation, and “something that probably should have been answered a while ago.” Translation: The department knew full well it should have turned this material over to congressional investigators last year, but instead deliberately concealed it.

House investigators nonetheless sniffed out a name, and Mr. Nunes in recent weeks issued a letter and a subpoena demanding more details. Deputy Attorney General Rod Rosenstein’s response was to double down—accusing the House of “extortion” and delivering a speech in which he claimed that “declining to open the FBI’s files to review” is a constitutional “duty.” Justice asked the White House to back its stonewall. And it even began spinning that daddy of all superspook arguments—that revealing any detail about this particular asset could result in “loss of human lives.”

This is desperation, and it strongly suggests that whatever is in these files is going to prove very uncomfortable to the FBI.

The bureau already has some explaining to do. Thanks to the Washington Post’s unnamed law-enforcement leakers, we know Mr. Nunes’s request deals with a “top secret intelligence source” of the FBI and CIA, who is a U.S. citizen and who was involved in the Russia collusion probe. When government agencies refer to sources, they mean people who appear to be average citizens but use their profession or contacts to spy for the agency. Ergo, we might take this to mean that the FBI secretly had a person on the payroll who used his or her non-FBI credentials to interact in some capacity with the Trump campaign.

This would amount to spying, and it is hugely disconcerting. It would also be a major escalation from the electronic surveillance we already knew about, which was bad enough. Obama political appointees rampantly “unmasked” Trump campaign officials to monitor their conversations, while the FBI played dirty with its surveillance warrant against Carter Page, failing to tell the Foreign Intelligence Surveillance Court that its supporting information came from the Hillary Clinton campaign. Now we find it may have also been rolling out human intelligence, John Le Carré style, to infiltrate the Trump campaign.

Which would lead to another big question for the FBI: When? The bureau has been doggedly sticking with its story that a tip in July 2016 about the drunken ramblings of George Papadopoulos launched its counterintelligence probe. Still, the players in this affair—the FBI, former Director Jim Comey, the Steele dossier authors—have been suspiciously vague on the key moments leading up to that launch date. When precisely was the Steele dossier delivered to the FBI? When precisely did the Papadopoulos information come in?

And to the point, when precisely was this human source operating? Because if it was prior to that infamous Papadopoulos tip, then the FBI isn’t being straight. It would mean the bureau was spying on the Trump campaign prior to that moment. And that in turn would mean that the FBI had been spurred to act on the basis of something other than a junior campaign aide’s loose lips.

We also know that among the Justice Department’s stated reasons for not complying with the Nunes subpoena was its worry that to do so might damage international relationships. This suggests the “source” may be overseas, have ties to foreign intelligence, or both. That’s notable, given the highly suspicious role foreigners have played in this escapade. It was an Australian diplomat who reported the Papadopoulos conversation. Dossier author Christopher Steele is British, used to work for MI6, and retains ties to that spy agency as well as to a network of former spooks. It was a former British diplomat who tipped off Sen. John McCain to the dossier. How this “top secret” source fits into this puzzle could matter deeply.

I believe I know the name of the informant, but my intelligence sources did not provide it to me and refuse to confirm it. It would therefore be irresponsible to publish it. But what is clear is that we’ve barely scratched the surface of the FBI’s 2016 behavior, and the country will never get the straight story until President Trump moves to declassify everything possible. It’s time to rip off the Band-Aid.
.
.