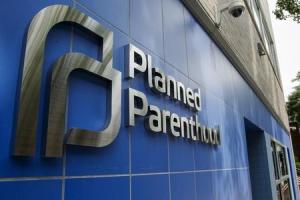 
A sign is pictured at the entrance to a Planned Parenthood
building in New York August 31, 2015. REUTERS/Lucas …

AUSTIN, Texas (Reuters) - A Texas grand jury has indicted two anti-abortion activists in a case involving covert videos on fetal tissue procurement talks with Planned Parenthood and found there was no wrongdoing on the part of the health group, a district attorney said on Monday.

The grand jury decision was a result of a probe launched last year under Texas Governor Greg Abbott, a Republican, who accused Planned Parenthood of the "gruesome harvesting of baby body parts." No evidence was provided by Texas to back the claim.

Planned Parenthood has denied the accusation and called the probe politically motivated.

David Daleiden and Sandra Merritt have been indicted by the grand jury for tampering with a governmental record, said prosecutors for the county in which Houston is located.

The two were involved in covert videos last year in which a discussion was held with a Planned Parenthood official on the procurement of fetal tissue.

Daleiden, founder of the Center for Medical Progress that released the videos, was also charged with violating a prohibition on the purchase and sale of human organs, a misdemeanor, the Harris County District Attorney said.

The videos purported to show Planned Parenthood officials trying to negotiate prices for aborted fetal tissue. Under federal law, donated human fetal tissue may be used for research, but profiting from its sale is prohibited.

Shortly after the release, Texas, the most populous Republican-controlled U.S. state, said it would launch a probe of Planned Parenthood.

"As the dust settles and the truth comes out, it's become totally clear that the only people who engaged in wrongdoing are the criminals behind this fraud, and we're glad they're being held accountable," he said.

The Texas governor said: "Nothing about today’s announcement in Harris County impacts the state’s ongoing investigation."