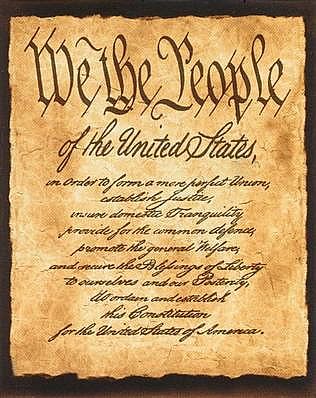 Many of us are up in arms about the recent decision of The U.S. Supreme Court which upheld The Affordable Healthcare Act, better known as Obama Care.

Our friends, fellow patriots, and neighbors have become overcome with the premise that it's over for our Republic and Constitution.

Obama has won, and there is no hope is the hue and cry.  What can we do now, and how can we survive as a nation is also the chant of the day.

There is a bright side to all of the dismay.  We must stay focused and in the words of our President, we must move FORWARD.

This decision should give us real hope, and inspire us to look ahead to our future of restoring America, and educating our fellow citizens of the horrors of the current Obama Administration.

For three years this President and our Congress pushed this unconstitutional bill through until it became the law of the land.  They hid scores of secret and bad gems throughout the bill and lied to us about its cost, and the fact that it would induce a tax burden upon all Americans.

Our side began to relax and we forgot the fact this bill was to be used as a way to overcome our civil liberties and to take over a large percentage of our economy.  A large majority of patriots assumed that all that is well would end well and that because of certain statements The Supreme Court would strike the bill down.

Surprise, Surprise, they did not strike it down, and the bill now stands as the law of the land.  Obama care will now move forward and the Progressives are now claiming total victory.

Wait a minute; is there a bright side to all of this?  Yes there is.  Now that the Supreme Court has upheld this bill, we can now cherish the opportunity that it brings to have all Americans feel its unintended effects first hand.

I believe that this decision will cause a backlash against the Obama Administration and Congress as it awakens us and causes us to bring about some real change in Washington DC and at local and State levels via the ballot box in November.

Now is our time to get to work to expose the ills of this terrible bill and to vet those that supported it.  By us doing that we will move our friends and neighbors on both sides of the aisle to make this November a mandate on Progressives and RINO'S that will make the 2010 mid-term elections look mild in comparison to 2012.

We have a great opportunity to use this decision to gain momentum and change the nature of our elected officials in Washington DC and at local and state levels.

Rather than giving up we should look at this decision as a blessing in disguise.  Justice Roberts may have given us the best tool yet to repeal this legislation.

First of all patriots and people involved in The Tea Party movement we must UNITE as one and do all that we can to defeat the sitting President.  We must also focus on the current make up of Congress and make sure that we increase our conservative majority in The House, and we must send Harry Reid back to a non leadership role in The Senate by gaining a majority in The U.S. Senate.

"FREEDOM And LIBERTY- USE Them Or LOSE Them!" You are a true American patriot as well!!!! We will change America back one voter at a time.

You are a true American patriot!!!

Everyone join Mitt's phone bank and make the calls!

Helen, I called five died in the wool Dems and they have changed their voter registration to Republican, they can not believe the Hussein Obama's lies and shredding of the constitution.  They fear him now as a dictator.

Helen you are a Patriot!  Wed. is the DAY and we need our country folks to stand up and SAY FREEDOM!

YES, all of us should make sure 10 friends check to make sure they are registered and those that are now old enough to register do so.  10 folks and ask them to check with 10 others.  It is really easy.

Sign up NOW and start making calls for Romney. Take back America!!!

The system calls you so it is free unless you get charged for incoming calls. It also blocks your phone number from being seen.

Repeal and replace requires majorities in the House and the Senate and removing Obama. Start working TODAY!!!!!

We the People will win.  So few elected are for US anymore.  It mad me mad when I heard the elected ones in DC speak for the People!!  Bull!! they don't speak for the majority of us that pay and have paid our WAY.  God Bless your efforts.