Please critique this for me...I've got writer's block! 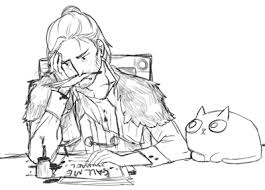 ...what do you think? sum up your impression of the following writing style in one word....run it by some of your friends:
.
~~~~~~~~~~
The Common Gallinule
"...She meanders on the water, slowly bobbing her bright red head.  Her large pale yellow feet push against the water beneath the surface.  She forages, watching the water carefully. The shafted sunlight creates columns in the dark water that illuminate schools of small minnows.    It’s just her and I enjoying the quiet lake on this cold day, me, in my Adirondack chair sinking deep into my sweater and her, dressed only in sleek dark plumage.  She peeps randomly, a solitary high pitch sound, like a small trumpet blast that echoes through the trees surrounding us.   Suddenly, spotting her prey, she upends at a 90 degree dip, her bottom and feet exposed.  She returns to the surface, unsuccessful.   After a while, six or seven large Muscovy ducks descend on our tranquility, swimming purposefully and in a row, like a gang ready to rumble.  They arrogantly push past her, puffing and hissing among themselves, gathering at the water’s edge. The Gallinule retreats and I stare after her as she grows smaller in the distance, paddling up the length of the bank. "
~~~~~~~~~~~~
HELP!
This is to be the opening paragraph of a new novel.
Your input in the COMMENTS section below would be deeply appreciated.
Thanks everyone!
RAYA @ REAL CONSERVATIVES

.
.
note-
Writer's block is a condition, primarily associated with writing, in which an author loses the ability to produce new work. The condition ranges from difficulty in coming up with original ideas to more extreme examples in which some "blocked"  writers have been unable to work for years, and some have even abandoned their careers. Throughout history, writer's block has been a documented problem
/
/

Pencil drawing needs more historical identity. Is that a TV in the background? Is the writer part of the 20th century or earlier?

What kind of animal is that?

That is so poetic and beautiful. I can picture the scene so vividly that I feel like I am the one in the story. It's very bitter sweet. <3 U! XOXO