I'M A WARRIOR!!!! ~ Message to Congressman Allen West on his wall on Facebook. 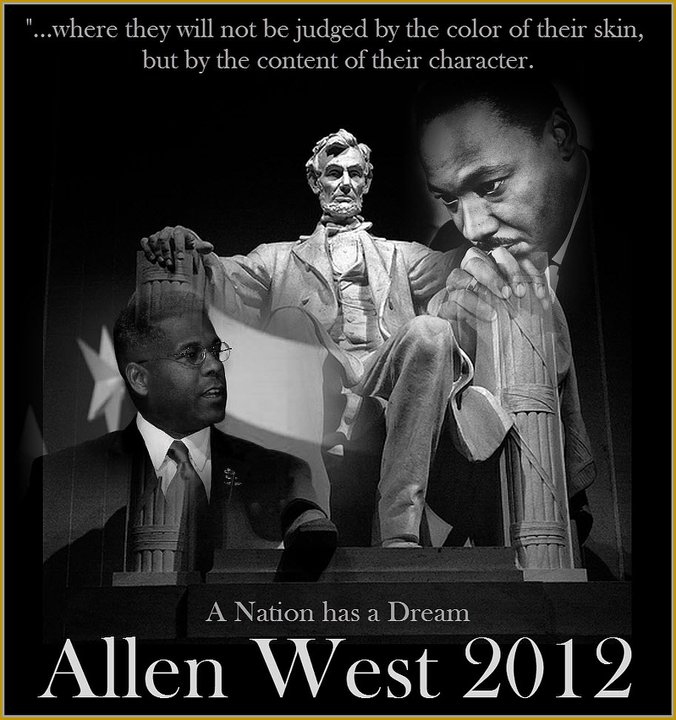 I have write this on Allen West wall, on his post in thoughts of our men and women that has died for our freedoms... I felt the need to tell him what I thought of that post, so I like to share with my friends... what is your thoughts?

You are very right Sir, I think on them quiet often, as my father was a war veteran from Vietnam, I'm the consequence of in American soldier passing through my Country and meeting my beautiful mother, I have the courage and the bravery of my father and I will fight for this Nation as I will not for the Country I born. as I'M AMERICA!

Because I think of them and I believe you do the same... I have make in Oath that it's between God and me, a promise that I intent to keep no matter what is in place... I will fight here at home, so our men/women in the armed forces will comeback HOME, not some strange Country that they can't recognize, I think of the blood of many who died before our time, in our time and will continue to died for our freedoms, and I wonder so many more times, if the freedoms we all talk about are nothing but shadows in the mirror, in utopia, because this Nation is going like in avalanche for it's own destruction, as we have the enemy within.

I'm worry Sir, like many more Americans of the direction that this Country is taken... I believe that you see the same signs that I and others see. I have look every person that is a potential runner for the Presidency of this Nation, and I have to said that worries me to see it's the same status quo, not what the Country need...

I know that for the last few months many patriots has ask you to come forward one more time, for this Nation, if you listen the cry's of the people as I'm, the worry of so many patriots, citizens for their future and the future of their children that it's almost gone, you will understand that what is happening in this Country is serious.

I listen to your speech on the Heritage Foundation, 21th Century, you line up there, exactly the reasons why it's YOU and not anyone else, that need to be our President, because you know the face of the enemy, you know the battle field, and you feel the cry of this Nation, a Nation that was build under the concept of Freedom for the Human kind, the Only Nation with Israel, that defend the rights of the people, if we fail on this task... the entire globe will fail, because we like it or not, for 234 years,many has look the other side of the Ocean, for hope, humanity, rights, freedoms, to dream and conquer, running away of tyranny, extermination, dictatorships, to grow and bring the world under the same banner of freedom... today seems that it's lost somewhere, and we are fighting to bring it back, today we fighting against those that look for our destruction here in home, while the rest of the world are outside waiting for us to became weak, and like hyenas attack at once...

Can we live with ourselves allow this to happen when we know that we should do something and we didn't?

I ask myself many times, why I have to go through dictatorship, why I study history or became a person of knowledge of the human heart, attitude and concepts, why I have inside of things that others don't, and why after all, been so small person, I have the heart of the Lion who will fight until the end for those very freedoms, and why of all the Countries I end up in the Republic of USA? Many questions that for years I have no answers for, but today I do... I came here and learn all I have to learn, to alert the people, to talk and wake up the people, to fight for this times we're in. I'm sure that today more than ever you're looking for guide like most of us... you wonder where your place should be in this mess we're in.

You see... we may have no change for 2016, perhaps will be too late for us and Israel, as we're attack at the same time...to make us weak, and it's only the strength, courage, valor, integrity, principle, faith, stand, honor of a true LEADER that can bring this Nation back.

We both know what we know, I believe you know that in history always drastic situations has been take care, not all the time for the best, with drastic solutions. I believe that we have the chance to save this Nation with a true leader, someone who people will trust, someone who can actually unite the American spirit, and became the Best Nation on the world, today we're just a joke, plain and simple, as the one call himself president, ( I have no respect for) is our bigger enemy, working on destroying our beloved Republic.

If we have someone else, it's very possible that this Nation will perish, on some States because the corruption of the gov. police states has became the bread of the day, people are being abuse, strip from their rights, the 4th A attack in a direct blow against the entire State and it's people.. we can't allow this abuse to keep on, we NEED YOU Congressman.. It's not something I said with out thought, but with much, looking what is happening... I will fight with you and for you, because I believe in you, because your spirit is mine and your courage as well... I live by principles and integrity no matter how hard is at times.. Please for your children, mine and the rest of our future, listen the cry's of the American People, the cry of a Nation that has been hit to many times.

I'm a true believer of "My God" and I know that nothing happen with out reason, even this message, I know is long... but I also know that if you have the change to read it, you will understand my words, because I believe that my worries and the millions of Americans are also your worries...I'M A TOOL FOR GOD, as many of us, and I know you said that will be GOD will, I believe so, but He give us tools to accomplish the task that He has put in our path, so as a tool, please listen...

I appreciate all your sacrifice's and so your family as well, maybe I ask too much, but I can't ask for less, because I ALWAYS comply with my promises and I have promise that my grand kids will not live in their future, what I have in my past, dictatorship. I willing to died to accomplish just that... I'M A WARRIOR SIR, and I will not stop the fight.

God Bless you with His Grace and Wisdom...

Comment by Chaplain Thomas Gilbert Cole on June 18, 2011 at 2:26pm
I am a Warrior Preacher, veteran of veterans, father of veterans, VETERAN DEFENDERS OF AMERICA.  We will keep Allen West in our daily prayers.  "Men must be governed by God or they will be ruled by tyrants." W.P.

Great letter, I also have great respect for Congressmen Allen West. If he doesn't run for President, he will do great things for us in Congress. There is a few in Congress that I can't wait to see what they do, including Marco Rubio, Rand Paul and Paul Ryan! I have great hope for our country with our Freedom believers standing up for our rights in Congress!

Comment by PHILIP SCHNEIDER on June 18, 2011 at 9:09am
I agree with you Antoniette, Allen West is a great American and a wonderful patriot.