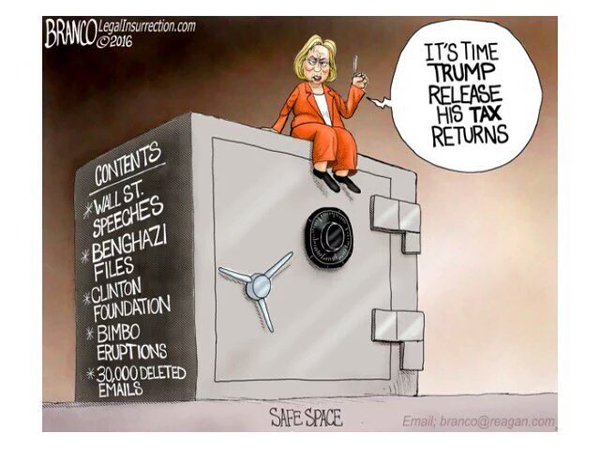 A 1998 interview confirms allegations by leading Republican presidential candidate Donald Trump that Hillary Clinton was involved in attacking women who accused her husband, then President Bill Clinton, of assault and other sexual improprieties.

In the interview, Hillary said those accusing and investigating her husband “would have a lot to answer for” and that their backgrounds would be investigated.

(Image from Today Show interview via You Tube.)

Clinton, the leading Democratic Party presidential candidate has come under fire from her GOP rival Trump for her role in enabling serial sexual abuse of women by her husband Bill. Trump has accused Hillary Clinton of ‘abusing’ women who claimed they were victims of her husband’s predatory behavior or were involved in consensual affairs.

“I hope Bill Clinton starts talking about women’s issues so that voters can see what a hypocrite he is and how Hillary abused those women!”

Last weekend on Fox & Friends (as reported by Breitbart), Trump said Hillary was not an innocent victim; that she played a role in Bill Clinton’s abuse of women.

“Trump said, “Her defense is — she’s got a problem. She’s married to a person that’s a serious abuser and I mean, at the highest level, and she — you know, she’s not an innocent victim. She was the one that would go along with him in this whole game that they play. And you look at what happened with some of the people that he took advantage of and then she gets involved. So she’s not like the innocent person sitting by the side with tears in her eyes She was very much involved.”

It is commonly believed by Clinton victims that Hillary was behind the siccing of private investigators on the many women who accused her husband of rape, sexual assault or infidelity in the 1990s.

Hillary Clinton revealed her hidden hand when she menacingly issued a clear warning of intimidation to her husband’s accusers (and those who would pursue their charges) on the nationally broadcast Today Show in early 1998 in the days after the Monica Lewinsky scandal broke.

The Today Show interview with Matt Lauer on January 27, 1998 is famous for Hillary’s claim that a “vast right-wing conspiracy” was behind the allegations of an affair between her husband President Clinton and White House intern Monica Lewinsky. (Transcript source.)

“This is—the great story here for anybody willing to find it and write about it and explain it is this vast right-wing conspiracy that has been conspiring against my husband since the day he announced for president. A few journalists have kind of caught on to it and explained it. But it has not yet been fully revealed to the American public. And actually, you know, in a bizarre sort of way, this may do it.”

Later in the interview, Hillary bluntly issued her threat:

Less than two weeks later, on February 8, former high level Clinton White House operative George Stephanopoulos said on the ABC News Sunday morning talk show This Week that the Clinton administration was threatening to go scorched earth on Clinton’s accusers and investigators by employing the ‘Ellen Rometsch strategy’ should they not back down.

The ‘Ellen Rometsch strategy’ involved blackmailing into silence Clinton accusers, investigators and political opponents by threatening to expose their backgrounds if they did not back off.

Sam Donaldson: “We know what the White House tactics are. I mean they have been almost open about it. Attack the press, and perhaps with good reason, attack the independent counsel, perhaps for some good reason, and stonewall on the central issue, which is the President of the United States. If he has nothing to hide, why is he hiding?”

George Stephanopoulos: “I agree with that. There’s a different, long-term strategy, which I think would be far more
explosive. White House allies are already starting to whisper about what I’ll call the Ellen Rometsch strategy.”

During and after the Lewinsky investigation that led to Bill Clinton’s impeachment for perjury and obstruction of justice, numerous women accusers were publicly or privately persecuted while several high-ranking Republican congressmen were exposed as adulterers for supporting Clinton’s impeachment–leading to the tumultuous resignation of Speaker-Designate Bob Livingston who was set to replace Newt Gingrich who resigned before his own adultery was exposed.

An intimidated GOP-led Senate held a pro-forma impeachment trial with a pre-arranged verdict of ‘not guilty’ so that senators would not be subjected to retribution via the Ellen Rometsch strategy as the House was, according to House impeachment investigator David Schippers.

Bill and Hillary Clinton went on to become multi-millionaires and global political superstars while the press discarded their research files on Bill’s sordid past as irrelevant.