THANKS, SUCKAS!...Lieing for the LIER 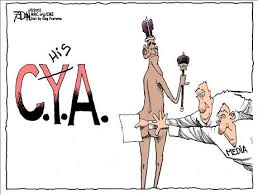 WASHINGTON -- A much anticipated congressional hearing Wednesday on the September 2012 attacks on U.S. diplomatic compounds in Benghazi, Libya, produced no major revelations but plenty of partisan fireworks as Republicans renewed charges that the Obama administration had covered up details of what took place while Democrats retorted that politics is driving the GOP-run investigation.

Three State Department witnesses filled in some details of the U.S. response to the assault, with one, the former No. 2 U.S. diplomat in Libya, providing a dramatic, blow-by-blow account of how he and his colleagues in Tripoli responded to the attacks, which killed Ambassador Chris Stevens and three other Americans.

Gregory Hicks, the first U.S. official who was in Libya that night to testify in public, described a final, frantic phone call in which Stevens told him from a burning residential building in the Benghazi compound, “Greg, we’re under attack,” before the signal was cut.

His voice at times cracking, Hicks recounted how he learned from a top Libyan official that Stevens had died in the Sept. 11, 2012, assault by scores of armed Islamist militants. “It was the saddest phone call in my life,” he told rapt members of the House Oversight and Government Affairs Committee.

At another point as he coordinated the embassy’s response, Hicks received a call from then-Secretary of State Hillary Clinton.

Clinton “asked me what was going on, and I briefed her on developments,” he said. “Most of the conversation was about the search for Ambassador Stevens. It was also about what we were going to do with our personnel in Benghazi, and I told her that we would need to evacuate, and that was – she said that was the right thing to do."

Hicks and the other witnesses – Eric Nordstrom, a diplomatic security officer who served in Tripoli until July 2012, and Mark Thompson, acting assistant secretary of state for counterterrorism – criticized an internal State Department investigation that blamed inadequate security in Benghazi on “systematic failures and leadership and management deficiencies at senior levels.” The inquiry, released in December, was incomplete, they said, because some individuals weren’t interviewed and the report didn’t hold senior-level officials accountable.

The hearing, however, failed to reveal any new proof of what Republicans charge was a bungled administration response to the attack, a coverup of the roles played by senior Obama aides and a deliberate bid to “mislead” the public with an erroneous initial account blaming the assault on protesters enraged by a crude online anti-Islamic video, and not terrorism.

That account was provided on five Sunday television shows by Susan Rice, the U.S. ambassador to the United Nations. The U.S. intelligence community took responsibility for wanting a reference to al Qaida dropped from talking points provided to Rice before the shows. But a Republican-authored report that was released last month claimed, based on a review of email traffic, that it was the State Department that objected to many of the details and drove their deletion.

Republicans on five House committees are coordinating an investigation of the attack. Minority Democrats say they’ve been excluded from the probes, whose primary target appears to be Clinton, who polls show is running ahead of other Democrats and prospective Republican candidates for the 2016 presidential election.

Stevens, on a visit to Benghazi, and a State Department communications specialist, Sean Smith, died of smoke inhalation at what has been referred to as the U.S. consulate in Benghazi. Tyrone Woods, and Glen Dougherty, former Navy SEALs working as CIA security contractors, were killed hours later in a mortar attack on a CIA annex where survivors from the consulate had taken shelter.

Rep. Darrell Issa, R-Calif, the committee chairman, opened the hearing by saying the goal was “to get answers because the families (of those killed) deserve answers.” He charged that the administration had refused to cooperate with requests for witnesses and documents and claimed that the panel’s minority Democrats “mostly sat silent.”
Rep. Patrick McHenry, R-N.C., was blunter. He accused the administration of “mismanagement and then the political coverup that resulted from the mismanagement and then a rush to judgment by some very ambitious political operatives within Washington.”

The committee’s top Democrat, Elijah Cummings of Maryland, issued a blistering statement, accusing Issa of staging a “media campaign that is not designed to investigate in a responsible and bipartisan way, but rather . . . of unfounded accusations to smear public officials.”

Hicks repeated his assertion, made in earlier closed testimony to investigators, that a show-of-force flyover of Benghazi by a U.S. warplane might have dispersed the militants and averted the attack on the CIA annex. He said that he’d learned from Libyans who participated in the anti-Gadhafi revolt that that they were “very aware” of the role played in his defeat by U.S. and NATO airpower and that he believed the militants in Benghazi would “not stand by if they were aware that American aircraft were in the air.”

But Democrats, seeking to discredit his assertions, pointed out that former Defense Secretary Leon Panetta and Army Gen. Martin Dempsey, the chairman of the Joint Chiefs of Staff, told a Senate committee in February that U.S. aircraft in Italy couldn’t have been sent because there were no midair refueling tankers available.

Hicks also testified that a four-member U.S. Special Forces unit that was in Tripoli training Libyan security forces had planned to fly to Benghazi hours after the attack on a Libyan transport plane to join a team of U.S. security personnel that already had arrived in the city. But he said the squad was denied permission to go as it was preparing to leave for the airport.

He acknowledged, however, that that second unit wouldn’t have arrived in Benghazi until around 7:30 a.m., by which time the surviving U.S. personnel were at the airport awaiting an evacuation flight back to Tripoli.

In a statement issued after the hearing, the Pentagon said that the team “could not have arrived in time to mount a rescue of those Americans who were killed and injured that night” and that the U.S. Africa Command operations center had decided not to send them because “there was nothing this group could have done by that time in Benghazi.”

Several Democrats took aim at assertions in an April 23 “interim” report by the Republicans that Clinton had signed an April 2012 cable calling for cutting U.S. security personnel in Libya despite repeated embassy requests for increased security because of growing crime and Islamist violence.

“We have now seen this cable and she (Clinton) did not sign it,” said Cummings. “Her name is printed on the bottom just like tens of thousands of cables sent every year from the (State) Department.”

At the White House, spokesman Jay Carney repeatedly defended the administration’s conduct before and after the attacks, saying Republicans are playing politics with the issue. He denied that the administration hasn’t cooperated with Republican investigators, saying that it has sent witnesses to 10 congressional hearings, held 20 briefings for congressional staffers and provided more than 25,000 pages of documents.

My thoughts lead to me tht. benghazi was the transport for arms to al-qaeda.  Stevens had just left Turkey's rep and was told to stop, dc was notified by turk tht. they were furious, the top man and his right hand man could not leave benghazi to tell all.  Stevens widow is not talking because of the benefits, Woods Dad was "got to", two down two left to go.  Stonewall is the only way, and the OMG (obama media gang) we know will eat their own so tht. the dem party survives, I bet stevens would disagree.  WE are living in a one party country and will, I hate to say it, forever.  Christians and Conservatives are doomed, best hunker down and try to survive cause they will come for you.

The democrats don't have me fooled!

I watched the hearings yesterday, the WHOLE thing!

The Obama administration fouled up at Benghazi and it cost 4 American lives! But we already knew that.

They've been in cover-up mode ever since the slaughter took place. But we expected that, they needed to win an election.

Why only NOW have these witnesses been allowed to finally testify to what REALLY happened? Democrats are now sure they have built "cover" answers AND documents. It'll be smoke and mirrors from here on out.

Obama obstructed every investigation and hid witnesses trying to bury the truth. Media has NEVER held Obama accountable or Hillary either. They are both media darlings.

This chapter in American history will be rewritten by the media over time to make Republicans and conservatives look like the bad guys.

Unfortunately they will succeed.