By Michael Snyder, on July 20th, 2013
`
It is so sad to watch one of America's greatest cities die a horrible death.  Once upon a time, the city of Detroit was a teeming metropolis of 1.8 million people and it had the highest per capita income in the United States.  Now it is a rotting, decaying hellhole of about 700,000 people that the rest of the world makes jokes about.  On Thursday, we learned that the decision had been made for the city of Detroit to formally file for Chapter 9 bankruptcy.  It was going to be the largest municipal bankruptcy in the history of the United States by far, but on Friday it was stopped at least temporarily by an Ingham County judge.  She ruled that Detroit's bankruptcy filing violates the Michigan Constitution because it would result in reduced pension payments for retired workers.  She also stated that Detroit's bankruptcy filing was "also not honoring the (United States) president, who took (Detroit’...", and she ordered that a copy of her judgment be sent to Barack Obama.  How "honoring the president" has anything to do with the bankruptcy of Detroit is a bit of a mystery, but what that judge has done is ensured that there will be months of legal wrangling ahead over Detroit's money woes.  It will be very interesting to see how all of this plays out.  But one thing is for sure - the city of Detroit is flat broke.  One of the greatest cities in the history of the world is just a shell of its former self.  The following are 25 facts about the fall of Detroit that will leave you shaking your head...

2) Detroit is facing $20 billion in debt and unfunded liabilities.  That breaks down to more than $25,000 per resident.

3) Back in 1960, the city of Detroit actually had the highest per-capita income in the entire nation.

5) Between December 2000 and December 2010, 48 percent of the manufacturing jobs in the state of Michigan were lost.

6) There are lots of houses available for sale in Detroit right now for $500 or less.

7) At this point, there are approximately 78,000 abandoned homes in the city.

8) About one-third of Detroit's 140 square miles is either vacant or derelict.

9) An astounding 47 percent of the residents of the city of Detroit are functionally illiterate.

10) Less than half of the residents of Detroit over the age of 16 are working at this point.

11) If you can believe it, 60 percent of all children in the city of Detroit are living in poverty.

12) Detroit was once the fourth-largest city in the United States, but over the past 60 years the population of Detroit has fallen by 63 percent.

14) There are 70 "Superfund" hazardous waste sites in Detroit.

16) Only about a third of the ambulances are running.

17) Some ambulances in the city of Detroit have been used for so long that they have more than 250,000 miles on them.

18) Two-thirds of the parks in the city of Detroit have been permanently closed down since 2008.

19) The size of the police force in Detroit has been cut by about 40 percent over the past decade.

20) When you call the police in Detroit, it takes them an average of 58 minutes to respond.

21) Due to budget cutbacks, most police stations in Detroit are now closed to the public for 16 hours a day.

22) The violent crime rate in Detroit is five times higher than the national average.

23) The murder rate in Detroit is 11 times higher than it is in New York City.

24) Today, police solve less than 10 percent of the crimes that are committed in Detroit.

25) Crime has gotten so bad in Detroit that even the police are telling people to "enter Detroit at your own risk".

It is easy to point fingers and mock Detroit, but the truth is that the rest of America is going down the exact same path that Detroit has gone down.

Detroit just got there first.

All over this country, there are hundreds of state and local governments that are also on the verge of financial ruin...

"Everyone will say, 'Oh well, it's Detroit. I thought it was already in bankruptcy,' " said Michigan State University economist Eric Scorsone. "But Detroit is not unique. It's the same in Chicago and New York and San Diego and San Jose. It's a lot of major cities in this country. They may not be as extreme as Detroit, but a lot of them face the same problems."

A while back, Meredith Whitney was highly criticized for predicting that there would be a huge wave of municipal defaults in this country.  When it didn't happen, the critics let her have it mercilessly.

But Meredith Whitney was not wrong.

She was just early.

Detroit is only just the beginning.  When the next major financial crisis strikes, we are going to see a wave of municipal bankruptcies unlike anything we have ever seen before.

All over the nation, our economic infrastructure is being gutted, debt levels are exploding and poverty is spreading.  We are consuming far more wealth than we are producing, and our share of global GDP has been declining dramatically.

We have been living way above our means for so long that we think it is "normal", but an extremely painful "adjustment" is coming and most Americans are not going to know how to handle it.

So don't laugh at Detroit.  The economic pain that Detroit is experiencing will be coming to your area of the country soon enough.

Unfortunately for We the (working) People, the Obama brand of economic pain has come to us nationwide and our nation will soon be in the Detroit financial crisis state.

But, where does the United States of America go to declare bankruptcy?

Will the pending disaster happen like the Costa Concordia sinking, a slow roll-over, dead in the water 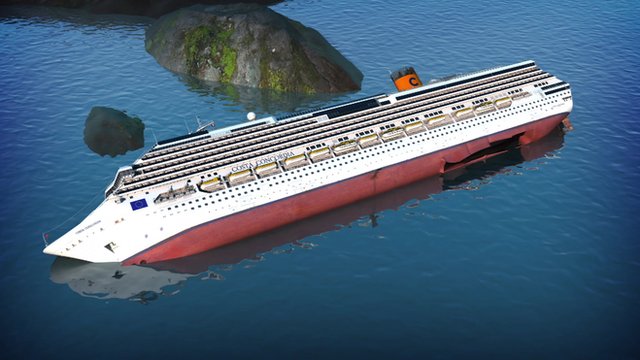 Will it be an unstoppable disaster like the Tsunami that submerged Fukushima, inexorably drowning everything and everybody in it's path?

BOTH AND YOU CAN THANK THE UNIONS