Where are the red bags for all this covid biohazardous waste?

WHERE are all the required rules for red bags and proper disposal of biohazardous waste for every business now reopening?
I have been a RN for over 30 years.I am not working after being forced to wear a precept procedure mask for 12 hours by Florida Hospital for no reason except I was allergic to the latex in the flu vaccine they were using and ended up with anaphylaxis and multiple chemical allergies to polypropylene and propylene glycol.
So I started thinking. The…
Continue

Those who cannot remember the past are destined to repeat it!

Lockdowns sow control over people especially people living in fear and panic. Next step is more lockdown which is happening and will involve all of us and then we start to turn on our family members. My neighbors are all hidden away being controlled, forced apart from their families, forced to stay away from the churches they helped build and not caring. There is a NEW group rising and it isn't who you think. And it isn't people on breitbart. Next people will be reporting their…

WHY is Desantis' motto "BUY Canadian?????

Does Desantis not understand the chant "Made in the USA" at every Trump rally?

Since Desantis became governor and appointed carpetbagger Corcoran to Florida education commissioner, our tax dollars are paying for  a CANADIAN mental health program that is now being implemented into every school district.

AND your kids and grandkids who can't refuse to do "lessons" are being data mined for Dr. Albright and his buddies at …

While everyone was distracted - Desantis and his wife just snuck mental health screening into the schools WITHOUT legislative approval!

This is long But important regarding EVERY child's education in Florida! Speak up or your state WILL be next!

The Florida Department of Education has mandated a YEARLY FIVE hour course in metal health for grades 6-12 - it  is written as a course in the statute. This is an idea that Desantis' wife came up with and was given to Corcoran at the FLDOE in spring 2019. It was passed by the FLDOE as a separate statute and NEVER went before the state legislature to create an actual…

Donate to build the Trump wall!...It's time for We the People to take back this country and BUILD the Wall!

It's time for We the People to take back this country and BUILD the Wall!

Ben Griffin (R) has the chance to flip state house race D49 in Orlando! Every vote for Ben is a ballot returned and affects ALL races including governor and senate! This is a way to keep our state from turning socialist!
Anyone can help GOTV for Ben, please make calls from home:
Contact Ben Griffin at voteforben49@gmail.com or his campaign manager Zac at…

Vote NO on Amendment 6 -Marsy's law!

Vote NO on Amendment 6 -Marsy's law!

This amendment will override the U.S. Constitution and allow every defendant to be "Kavanaughed" Anyone can now be falsely accused of anything and this law strips away a defendant's rights to due process!…

John McCain and the swamp's role in the dismantling of the Tea Party!

This story was on OAN in June. BUT even FOX ignored this big revelation from Judicial Watch!

officials: “the solution is to audit so many that it becomes financially…

BEWARE! THE FLORIDA SENATE IS TAKING AWAY YOUR RIGHT TO DUE PROCESS! Will your state be next??

Here’s the first sentence in the MARJORY STONEMAN DOUGLAS HIGH SCHOOL PUBLIC SAFETY ACT that the Florida senate secretly debated Saturday night “Authorizes a law enforcement officer who is taking a person into custody for an involuntary examination under the Baker Act to seize and hold a firearm or ammunition from the person for at least 72 hours, or until the person appears at the agency to retrieve the firearm or ammunition.”
This vague clause CAN be interpreted any way a police…

Time to start draining the swamp!

Our first chance to DRAIN THE SWAMP is on Sept 26th and we NEED to get a win for Judge Moore in Alabama!!

Please copy then email and post this Moore event to all of your friends and family in Alabama:

Hosted by Judge Roy Moore for US Senate

This event is free…

Let's get the WIN for Trump and for America and the Constitution!

Is this the America we want to leave to our children?

Florida is a TIE in ballots cast dems 40% and repubs 40.4 %. Independents 20%. Everyone your vote MATTERS this time! Independents your votes matters more than ever - don't waste it!!!! Do you want to tell your children and grandchildren that you cast the deciding vote…

Paul Nehlen has been endorsed by retired US Army Major General Paul Vallely. He served in the Vietnam War and was Deputy Commanding General, Pacific Command. He was also a senior military analyst for Fox News.

Paul Ryan wouldn't stop and talk to moms who lost their beloved children to open borders on Saturday!

Paul Ryan wouldn't stop and talk to moms who lost their beloved children to open borders!

Here's the video of Ryan driving AWAY from these moms on Saturday:
https://www.facebook.com/derek.hankerson/posts/10210049965115531…
Continue 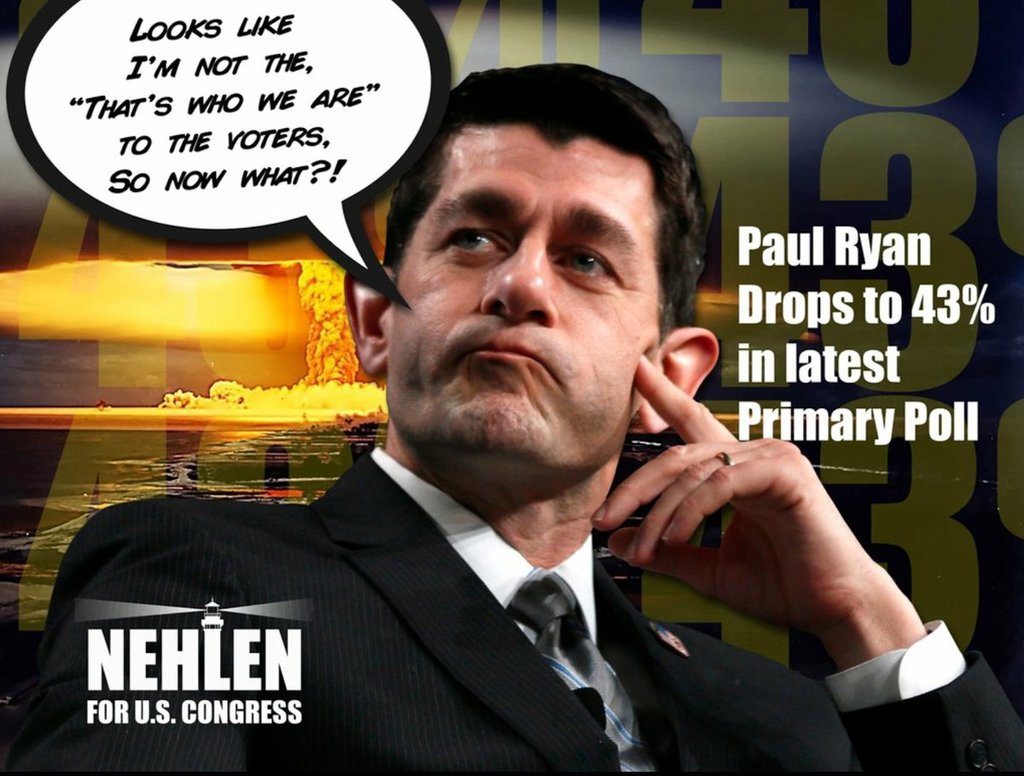 Cruz's plan is to "DELINK healthcare from employment

Cruz's plan is to "DELINK healthcare from employment"  Everyone NEEDS to pay close attention!!! I finally got the answer to a key question regarding Cruz's healthcare reform. It was in my friend’s Cruz phone bank talking points.  If you vote for Cruz, you WILL lose your employer based healthcare. Trump's plan does NOT do this. This means a vote for Cruz is a vote for increasing your healthcare insurance costs by thousands as your employer will not be paying for all or part of it anymore.…

The Times of Israel posted this on Sunday!

In January, Ted Cruz proudly announced the endorsement of Mike Bickle. Today this story appeared in The Times of Israel:

GOP candidate has been touting endorsement from Mike Bickle, who notoriously said God sent Hitler to hunt Jews for not accepting Jesus as…

Please copy and paste and forward to all voters especially your contacts in NH!

Just a reminder that these are Marco Rubio’s own words from 2010 from his senate campaign website. Floridians and Tea Party groups across the country phone banked, donated money and voted him into the Senate repeating and trusting these words.

Did Marco keep his word when he stood with Schumer on immigration and amnesty?

Call and Support Daniel Webster for Speaker of the House

It’s time to make our voices heard. Make calls to your congressman and let’s get Daniel Webster elected Speaker of the House. Call (202) 224-3121 or look up your representative at http://www.house.gov/
Who is Daniel Webster? He’s the guy who stood up to Alan Grayson and won! Remember those “Taliban Dan” ads? Remember the fake Tea Party candidate? Dan Webster fought back and walked house to house and won! It’s time for us to fight for him again.…

Turn the Senate conservative! Phone from home and GOTV for Chris McDaniel. Senate runoff election in Mississippi is this Tuesday.

We have a chance to remove Thad Cochran from the senate this Tuesday. He's trying to get every democrat vote to pull out a win and the race is a tie. Let's show the country the power of We The People!!! Make Calls for Chris across the country.

If you live in Virginia please vote Cuccinelli! If you have friends there call and GOTV!!!!

I am making calls into Virginia to GOTV for Ken. I just talked to a man who is poll watching in Northern Virginia. The turnout is very low and the democrat woman who is also poll watching is getting very discouraged that the dems are not turning out and they may lose!!!

Make sure you vote Cuccinelli if you live in Virginia. If you have friends in Virginia, call them and let's get every last Cuccinelli voter to the polls!!! Obama's approval is now in the 30's - let's show him…