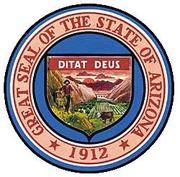 For the upcoming elections etc

In a stunning development that could potentially send the nation into a Constitutional crisis, an astute attorneywho is well-versed in Constitutional law states that theruling against the State of…Continue

You need to be a member of Arizona State Group to add comments!

Proud to be an Arizonan conservative and looking forward to our Centennial Celebration next month.  We are just a hundred years old as the No. 48th state.

Comment by Sandra on May 25, 2011 at 5:27pm
Welcome to the group Annie; Hopefully as elections grow closer, people will start posting state issues in the groups... Each State is in charge of the importnat issues and candiates. We need to get our states back under control and way from the BIG brother attitude and that includes, Counties, Cities and State Houses! School boards are critical to monitor... They started almost two years ago to control the future of our children by what the left teachers are doing in classrooms.  Follow the money always on who supports any candidate. I appears we have to watch unions donations and if newspapers and other big donators are backing any particular. Take a good look at whoever they may be attacking... The dems use fear to get votes, we need to educate people that as in SS, it does NOT effect anyone currently on it. Old people are fearful of losing care under medicare and that is exactly what the Dems want... Again, welcome....

Comment by Sandra on October 26, 2010 at 3:45pm
Looks like Clinton appointed federal Judge
Roslyn Silver is trying
to make sure which way Arizona votes on November 2. Even
people who are against the death penalty deeply resent the federal
interference based on such a frivolous excuse. What difference
does it make, whether the sodium thiopental was made in Canada
or by a manufacturer in the US, who is using it's monopoly
to create an artificial shortage?

Sodium thiopental is not something new or experimental. It
is on the World Health Organization list of drugs to be
"on hand" at any hospital (outside of the US), same as
Aspirin and many other common drugs. For executions
they simply use a much higher dosage, than when a patient
is expected to wake up again shortly afterwards.

The whole issue is just federal meddling, and the results
will probably become very visible on November 2.

Comment by Sandra on September 22, 2010 at 10:39pm
I would think possibly going to their web site John. I will ask and see if I can get any one to respond.

Comment by John Mosier on September 22, 2010 at 8:35pm
Do you know how to contact any Oathkeepers in Arizona?

We are planning the Arizona Freedom Rally II in Prescott Valley, AZ for Oct. 16, 2010. We would like to have an Oathkeepers table at our event.

As our national debt rockets past $13 trillion, just imagine if a constitutional amendment to balance the federal budget had been ratified 25 years ago. That almost happened, says Nick Dranias, director of the Joseph and Dorothy Donnelly Moller Center for Constitutional Government at the Goldwater Institute...

Comment by Sandra on September 21, 2010 at 4:09pm
Welcome Ila; Nice to have you in this group. Seems this is one of our more active groups so far... Share any AZ related items if you run across any. Again, welcome...


Feb 12, 2008 ... John McCain assumes the GOP front-runner mantle, his long-standing, but little-noticed association with donors such as George Soros and ... www.wnd.com/?pageId=56177 - Cached


Feb 2, 2008 ... Upon close examination, it turns out that Senator John McCain and his various efforts are funded by a number of George Soros' shadowy ... www.wvwnews.net/story.php?id=819 - Cached - Similar


Feb 12, 2008 ... It seems that the Republican frontrunner, John McCain, accepted money from no one else than George Soros, the uberliberal billionaire whose ... www.theatlanticright.com/.../john-mccain-funded-by-george-soros/ - Cached


Jun 13, 2006 ... John McCain did speak at Jerry Falwell's university, something that has vexed many McCain supporters, and George Soros did spend more than ... www.thewashingtonnote.com/archives/001487.php - Cached - Similar


Mar 10, 2005 ... Huffington has long acted as a front for George Soros' "campaign ... the so-called Shadow Conventions which provided John McCain with a ... www.discoverthenetworks.org/.../john-mccain-gets-soros-cash.html

Comment by Sandra on September 20, 2010 at 9:17pm
Great and glad things are working in AZ too. Nice ogotos thanks for sharing them