Points of view...from the REAL Military

...from the REAL Military 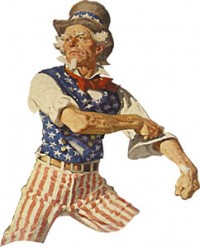 IS THE ENEMY WITHIN THE GATES? (May 10, 2013) — A press conference hosted by Freedom Watch at the National Press Club on Thursday depicted family members of Navy SEAL Team 6 and a National Guardsman killed on August 6, 2011 when their helicopter was shot down asking Obama to conduct a thorough investigation of the cause.

A total of 30 Americans died in the crash.

One couple of a SEAL who died stated that Adm. William McCraven, head of the Joint Special Operations Center (JSOC), was untruthful when he met with them this past January to discuss the circumstances of their son’s death and the presumed investigation.

Rep. Louis Gohmert (R-TX) told Tom Trento, the video company host (beginning at 7:05) that the SEALS were placed in danger “without the helicopter they needed.”  Gohmert said that “We are completely messed up” if the American strategy is to “win hearts and minds” of Islamics rather than to protect U.S. servicemen and women.

The helicopter in which the SEALS were flying on a mission to assist Army Rangers, referred to as “Extortion 17,” was reportedly built in the 1960s and refurbished in 1985.  The pre-conference press release stated that the SEALS were sent on their mission “without proper air support.”

One of those killed had warned his parents that after SEAL Team 6 was identified as the unit which had carried out the bin Laden raid on May 1, 2011, his life and theirs were in danger.  Three months later, he and 29 others were dead.

Adm. James “Ace” Lyons (Ret.) of the Center for Security Policy spoke at the press conference and stated afterward that members of The Muslim Brotherhood, which has identified the United States as a sworn enemy, have gained a presence in all government departments.

Atty. Larry Klayman said that the SEAL team was exposed to danger after Osama bin Laden was killed in May 2011.  “Our Navy SEALS and National Guardsmen – their identities were released initially by our president and vice president unnecessarily.  This was classified information, and as a result, as you’ll hear, the fallen servicemen that we’re talking about today literally had targets on their backs.”

Klayman has an Obama eligibility lawsuit pending with the Alabama Supreme Court and has accused Obama of committing treason against the United States of America for leaking national security secrets in June 2012 and supporting “radical Muslim interests such as…the Muslim Brotherhood in Egypt and throughout the Middle East.”

The first interview Obama gave after having been sworn in, albeit incorrectly, was with an Arab television network.  Soon thereafter, he departed on a trip to the Middle East purportedly to “reach out to the Arab world as the region struggles to find peace.”

Gone are the authoritarian regimes and leaders in Tunisia, Egypt, Libya and Yemen, and the once seemingly indestructible Assad regime in Syria is tottering on the brink of collapse. Uncertainty abounds in the wake of the revolutions that have convulsed the Arab world for the past two years and shaken many of the strong but imperfect pillars of stability on the planet’s most politically volatile patch of land…,

Beginning in December 2010, popular uprisings occurred in Tunisia, Yemen, Egypt, Syria and Libya.  While governments were replaced, those of Tunisia and Egypt adopted Islamic-style regimes, with Egypt’s Mohammed Morsi seizing greater powers shortly after assuming office, resulting in violent protests, death and destruction in addition to a faltering economy.

Syria has been embroiled in a civil war which has killed upward of 60,000 and in which Obama insists the U.S. should be involved.  It is suspected that the U.S. compound in Libya, which was attacked on September 11 and resulted in the deaths of four Americans, was involved in transferring arms to the Syrian rebels seeking to unseat Bashir Assad, but that the rebel groups include Al Qaeda and other terrorist group members.

Joining a growing chorus of retired military veterans, U.S. Rep. Ann Wagner said during a recent interview that only “the president” could have given the “stand-down” orders described in sworn testimony to the House Oversight and Government Reform Committee on Wednesday which prevented military assistance from reaching Benghazi.  According to news reports, Obama retired early on the evening of September 11 after learning that Americans were under attack.

Speaking toward the end of the press conference, Klayman said that we are living in revolutionary times and called for peaceful efforts to revert America back to its Judeo-Christian heritage, ethics and principles.  He called upon the media to report his and others’ findings to the public.

On Friday, in a piece without a bylinn, Fox News reported that those speaking at the presser “tried to reopen the book on the crash.”

The Post & Email does not publish articles without including the writer’s name.

The Wall Street Journal, Infowars, a Navy SEAL blog and other bloggers carried the announcement of the press conference in advance.

On the matter of illegal immigration, Obama’s “Gang of 8″ is reportedly ignoring input from the union president of the Immigration and Customs Enforcement (ICE) division of the Department of Homeland Security (DHS), who told talk show host Mark Levin that members of the pro-illegal immigration group La Raza “are running our agency.”  Chris Crane additionally told Levin that Border Patrol agents are no longer able to perform their jobs because their arrest powers have been confiscated by the regime.  He and nine other ICE employees have filed a lawsuit against the Obama regime.

Obama’s Department of Justice has sued numerous states seeking to uphold federal immigration law already in place and threatened others with lawsuits for passing nullification or sovereignty laws under the Ninth and Tenth Amendments to the Bill of Rights.

Obama has given billions of dollars to “green energy” companies which produced virtually no jobs and in many cases, went bankrupt.  The executives of at least one company, Solyndra, had been his financial supporters.

In the field of education, Obama created the “Race to the Top” contest in which states could compete for the most funding for their public schools while at the same time agreeing to accept the new Department of Education’s “Common Core” curriculum.  The new program reportedly abolishes standard subjects and methods of teaching in favor of an analytical approach which experts report contains Marxist ideology.  In California, teachers must agree to teach the new Common Core methodology or lose their certification.  Christian students are today increasingly persecuted by public school officials.

In 2009, the names “Malik Shabazz,” head of the New Black Panthers, and “W. Ayers [Bill],” former domestic terrorist, appear on the White House visitor logs, although an official reportedly said, “Those are not who you think they are,” citing the “transparency” of the regime.

Putative Attorney General Eric Holder was once and may still be an angry black man who blames whites for the perceived ills of the country.

Obama has presided over the greatest economic downturn since the Great Depression but raised taxes earlier this year.  However, he told Texas high school students on Thursday that “We’re poised for progress.”

Obama praises open homosexuals and abortion and lies about the “benefits” of his “health care reform,” which many Americans are discovering is costing them much more each year than before it was implemented.

Members of the Obama regime have intimidated, threatened, harassed, and insulted law-abiding members of the media who have attempted to report truthfully on the actions of government in keeping with the First Amendment.  State Department officials working under Hillary Clinton created a scenario whereby Libya charge d’affaires Gregory Hicks, who had questioned Susan Rice’s description of the Benghazi terrorist attack as “a protest” on national television on September 16, was rendered unemployed and then demoted to a desk job following his many years of recognized outstanding service.

While infusing Islam into the military, all government agencies and American society, Obama’s Justice Department seeks to deport a Christian homeschooling family because “homeschooling is not a fundamental right.”  However, Holder has selectively failed to prosecute “his people” for breaking the law and illegal immigrants from voting.

Obama and his representatives lied about the cause of four Americans dying in Benghazi despite knowing that the terrorist group Ansar-al-Sharia had provoked it.

During the SEAL Team 6 press conference, one of the speakers remarked that the military has been infiltrated with political correctness to the point that “the enemy” is no longer known.

Do the American people know who the real enemy is?

Is it conceivable that with Obama’s history of “palling around with terrorists” who trample on the American flag and set off bombs at national landmarks, he was placed in office to carry out the worst against America?

Is that why the parents of the Navy SEALS have only empty promises?

The families of three fallen Navy SEAL Team Six members say President Obama and Vice President Biden are culpable for the deaths of their sons for publicly identifying the unit that killed Osama bin Laden and pursuing policies that coddle Muslims and put our own troops at a tactical disadvantage.

SEAL Team Six carried out the daring raid in Pakistan in early May 2011. Three months later, three members of the unit were among 38 killed in a Chinook helicopter crash in Afghanistan. Twenty-five of the dead were special operations forces. Larry Klayman is founder of Freedom Watch, a WND columnist and the attorney representing three of the families who lost their sons. He said the Obama administration carelessly and illegally revealed the role of SEAL Team Six shortly after announcing the successful mission to kill bin Laden.

“Shortly after that successful raid on bin Laden, the president – through the vice president for political purposes – released the name of SEAL Team Six. That’s classified information, and even (then) Defense Secretary Robert Gates was critical of that. So that was like putting a target on the backs of the sons of my clients,” said Klayman, who revealed the helicopter may have been infiltrated by the Taliban before the crash because the Afghans on board were last-minute changes from the names on the original flight manifest.
Klayman said Vice President Joe Biden deserves special blame for these deaths.

“Biden did something, which was more than irresponsible. He served on foreign relations committees, intelligence committees. He knew, or should have known, what he was doing. He should be held accountable. Frankly, he should even be held criminally accountable for doing that,” Klayman said.

In addition to the identification of the the team, Klayman said the Obama administration is culpable for these deaths due to a policy of coddling Muslims and putting tremendous restrictions on U.S. forces.