Since March of 2010, the American people have had to suffer under the incredible economic burden of the Affordable Care Act—Obamacare. This legislation, passed by totally partisan votes in the House and Senate and signed into law by the most divisive and partisan President in American history, has tragically but predictably resulted in runaway costs, websites that don’t work, greater rationing of care, higher premiums, less competition and fewer choices. Obamacare has raised the economic uncertainty of every single person residing in this country. As it appears Obamacare is certain to collapse of its own weight, the damage done by the Democrats and President Obama, and abetted by the Supreme Court, will be difficult to repair unless the next President and a Republican congress lead the effort to bring much-needed free market reforms to the healthcare industry.

But none of these positive reforms can be accomplished without Obamacare repeal. On day one of the Trump Administration, we will ask Congress to immediately deliver a full repeal of Obamacare.

However, it is not enough to simply repeal this terrible legislation. We will work with Congress to make sure we have a series of reforms ready for implementation that follow free market principles and that will restore economic freedom and certainty to everyone in this country. By following free market principles and working together to create sound public policy that will broaden healthcare access, make healthcare more affordable and improve the quality of the care available to all Americans.

Any reform effort must begin with Congress. Since Obamacare became law, conservative Republicans have been offering reforms that can be delivered individually or as part of more comprehensive reform efforts. In the remaining sections of this policy paper, several reforms will be offered that should be considered by Congress so that on the first day of the Trump Administration, we can start the process of restoring faith in government and economic liberty to the people.

Congress must act. Our elected representatives in the House and Senate must:

The reforms outlined above will lower healthcare costs for all Americans. They are simply a place to start. There are other reforms that might be considered if they serve to lower costs, remove uncertainty and provide financial security for all Americans. And we must also take actions in other policy areas to lower healthcare costs and burdens. Enforcing immigration laws, eliminating fraud and waste and energizing our economy will relieve the economic pressures felt by every American. It is the moral responsibility of a nation’s government to do what is best for the people and what is in the interest of securing the future of the nation.

Providing healthcare to illegal immigrants costs us some $11 billion annually. If we were to simply enforce the current immigration laws and restrict the unbridled granting of visas to this country, we could relieve healthcare cost pressures on state and local governments.

To reduce the number of individuals needing access to programs like Medicaid and Children’s Health Insurance Program we will need to install programs that grow the economy and bring capital and jobs back to America. The best social program has always been a job – and taking care of our economy will go a long way towards reducing our dependence on public health programs.

Finally, we need to reform our mental health programs and institutions in this country. Families, without the ability to get the information needed to help those who are ailing, are too often not given the tools to help their loved ones. There are promising reforms being developed in Congress that should receive bi-partisan support.

To reform healthcare in America, we need a President who has the leadership skills, will and courage to engage the American people and convince Congress to do what is best for the country.

These straightforward reforms, along with many others I have proposed throughout my campaign, will ensure that together we will Make America Great Again. 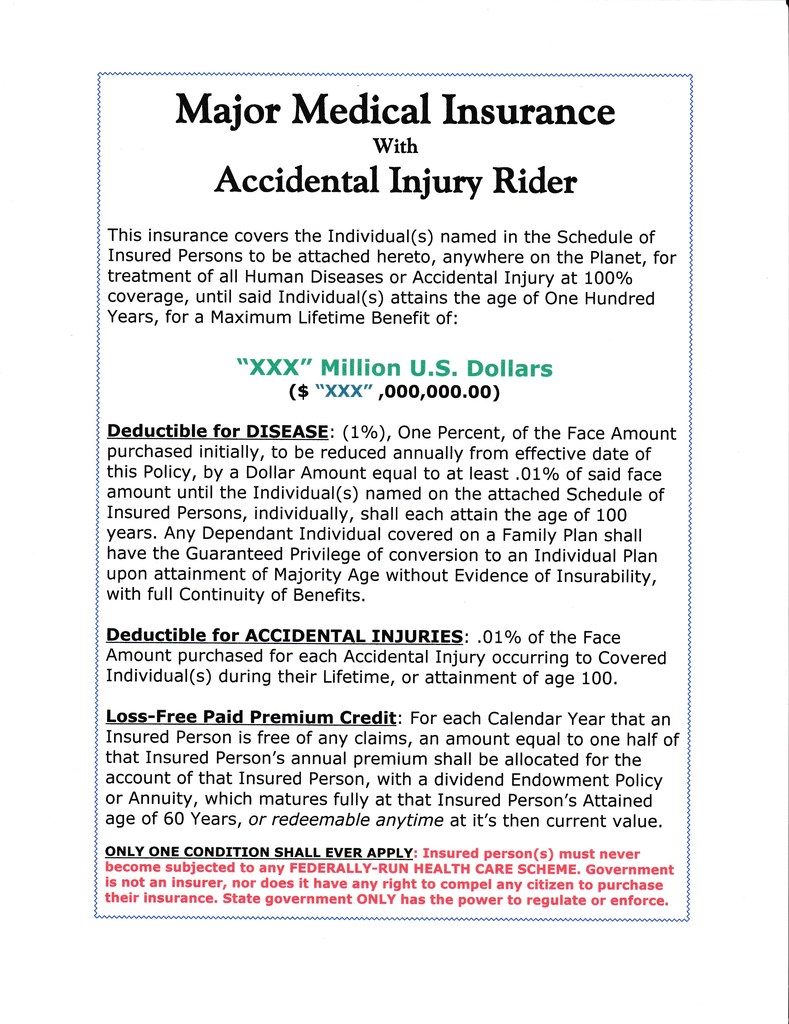 This is MAJOR MEDICAL INSURANCE for CATASTROPHIC illness (High Deductible) This insurance assumes the person(s) to be insured start in good health, with no condition that existed previously....THIS IS AN AUTOMATIC COST CONTROL. Insurance secures the uncertainties of the FUTURE, not sicknesses that are already present. To pay for a medical mis-fortune that already exists is not Insurance. It is CHARITY.

The deductible is HIGH, because the probability of a newly insured person becoming ill, with a catastrophic illness, is LOW. The premiums would be affordable to all, based on that assumption. The Plan can never be cancelled or the benefits modified by the insurer, only by the insured, because it is silent on that point.

It is portable because it covers the Insured Person(s) individually, no matter their employment status. It is universal, covering "anywhere on the Planet". All payments for medical expenses are made directly to the insured, who has the sole right to assign benefits to the healthcare providers.

All newly born children of insured person(s) would be covered from the moment of conception, disregarding any Genetic or Pre-Natal considerations. Parents with pre-existing conditions, though not qualified for this Insurance, or Qualified Parents, have the absolute statutory right to purchase this Insurance for their children, born or yet to be born, with no Medical Underwriting.

ACCIDENTAL INJURIES are covered as they occur, with a lower deductible, because accidental injury is a purely fortuitous, unforseen event, and the proper way to insure the chance of a loss, as in fire insurance, auto insurance, and any other unforeseen casualty. There will be a surcharge on premiums for people in hazardous occupations or avocations such as test-pilots, football players, etc.

The Face Amount of the policy is selected by the person(s) to be insured, optionaly beginning at One Million Dollars. Premiums are calculated at base rates on $1,000,000.00 coverage. As the face amount purchased increases, the premium is factored upwards because of the increase in risk, but diminishing at higher amounts because the overall probability of having a Ten Million dollar loss is less than a Five Million, Four million, Three Million, Two million or One Million dollar loss.

The Deductible for Accidental Injuries is constant at 1/100th of one percent of the face amount, per accidental injury, regardless of when the injury occurs.

The Loss-Free Paid Premium Credit is, by definition, a Health Savings Account (HSA), which matures at compounded interest at the Insured Person(s) attained age of 60 years old. Alternatively, it is also a regular simple-interest savings plan if redeemed at any time before the insured person(s)’ attained age of 60, with full non-taxable withdrawal privileges in either instance.

NOTE - Insured person(s) shall lose any of the foregoing benefits they have accrued if they ever submit or surrender their Freedom to Choose to any Government-run Health insurance scheme.

THIS IS ESSENTIALY HOW HEALTH INSURANCE WAS PRIOR TO 1965, WHEN A LIBERAL CONGRESS "FUNDAMENTALY CHANGED" HEALTH INSURANCE WITH THE ENACTMENT OF MEDICARE AND MEDICAID, IN 1965, ( http://tpartyus2010.ning.com/profiles/blogs/once-upon-a-time-in-ame... ) REMOVING MILLIONS OF PREMIUM-PAYING CITIZENS FROM THE FREE MARKET. SO MUCH FOR "CHANGE". THIS WAS LBJ'S "GREAT SOCIETY"...WHICH ALSO PUNISHED THIS NATION WITH A NO-WIN STRATEGY IN VIET NAM. HISTORY REPEATING ITSELF.

Obamacare is officially in limbo. The next election will decide a new direction.