has a history of anti Trump tweets 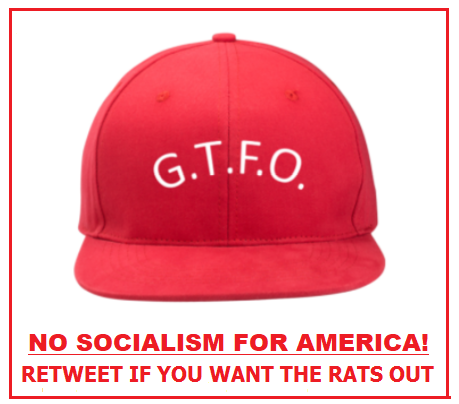 We are now witnessing the continued PILE-ON of President Donald J. Trump by the cowards of the Left.  The left-wing subversive communists, a small but determined minority in our Nation, have, for decades, attempted to overthrow our Traditional Values with their dreams of "Fundamental Transformation".  When their DreamQueen, comrade Hillary Klinton failed to get herself elected in 2016 they then resorted to a scorched-earth, corrupt and criminal strategy of "resistance", evidenced by the Fake News' hoaxes of 'Russia Collusion', 'Obstruction of Justice', 'Quid Pro Quo', 'Impeachment', etc., which extended all the way to the top echelons of the shadow government swamp such as the FBI, CIA, NSA, and other intelligence and Law Enforcement agencies..."The Great American Witch-Hunt" of the 21st century.

As you know, REAL CONSERVATIVES has been systematically BANNED from Twitter because they are are afraid of the content we regularly post here, on this, your site for Truth:

(  Your Uncle Sam has been suspended by Twitter...the Brave New NAZIS  )

The left in this country needs to be silenced, once and for all, by a resounding, powerful, CRUSHING defeat at the polls on election day in November.

This victory will only be realized if Real Conservative Patriots literally SWARM the polls and vote in MASSIVE NUMBERS for the one man, a Champion of Liberty, who has stood up to the vast left-wing conspiracy that has sought to destroy our culture these many years. That one man, that CHAMPION, is none other than Donald Trump, the 45th President of the United States.

Show your support for this Hero by every means at your disposal, and mass display of your support.

Here's one of many ways you can do this: Check out this absurd email Twitter just sent us

Twitter employees are outraged by the company’s refusal to stop President Trump from using the platform to promote a conspiracy theory involving a former staffer of Trump critic and media personality Joe Scarborough, according to tech journalist Kara Swisher.

Swisher reported Tuesday that the widower of Lori Klausutis, who died suddenly in 2001 while working as a staff member in Scarborough’s congressional office in Florida, wrote Twitter CEO Jack Dorsey a heartfelt letter last week asking him to stop Trump from continuing to spread conspiracy theories about his wife’s death via the social media platform. Dorsey has so far refused to remove Trump’s tweets about Klausutis, a decision that Swisher said has angered many of the company’s employees.

“You might wonder why I get so much good information from inside Twitter,” Swisher said in an interview with the Yahoo News podcast “Skullduggery.” “They’re very unhappy.”

Swisher was co-executive editor of the Wall Street Journal’s All Things Digital website for years and went on to co-found the website Recode. Now an opinion columnist at the New York Times, she is widely regarded as one of the best-sourced journalists covering the technology industry.

In his letter to Dorsey, Timothy Klausutis alleged that the president violated Twitter’s terms of service when he used the platform to suggest that Scarborough had an affair with his wife and then murdered her. Authorities long ago concluded that Lori Klausutis, 28, suffered from a heart condition that caused her to fall at work, hit her head on her desk and die unexpectedly.

“An ordinary user like me would be banished from the platform for such a tweet, but I am only asking that these tweets be removed,” Klausutis wrote in his letter, which was first reported by Swisher in the New York Times Tuesday. “I’m asking you to intervene in this instance because the president of the United States has taken something that does not belong to him — the memory of my dead wife — and perverted it for perceived political gain.”

Swisher told “Skullduggery” that Dorsey does not want to remove Trump’s conspiracy-promoting tweets because he believes that they are newsworthy. But she said the problem with that stance is that it fails to consider the impact on Lori Klausutis’s widower. Swisher said that while she does not always enjoy the personal attacks she receives as a public figure and author, it comes with the territory — which is not true for Klausutis.

“If they want to act like a public square, let’s have a public discussion about this where we can have measured discussion and not a tweetstorm where everybody’s sending idiotic GIFs to each other and sort of topping each other and calling you a bitch or whatever the heck they want to do, I forget what I’ve been called today,” Swisher said. “Joe Scarborough’s going to be OK. ... He knows the price of this kind of thing. Donald Trump knows the price of this kind of thing. This widower is not these people.”

A Twitter spokesman said that while the company is “deeply sorry” the president’s tweets have caused Klausutis pain, the company will not remove them. The statement noted that the company is “working to expand existing product features and policies so we can more effectively address things like this going forward, and we hope to have those changes in place shortly.”

Swisher called the statement a “typical Twitter response, which is a nonresponse.”

Swisher said her reporting suggests Twitter is leaning toward implementing a system in which false content is labeled and supplemented with articles offering factual counterpoints.

“It’s interesting, but it’s really onerous to do, it’s not scalable — they can only do it sometimes — and almost every tweet of his [Trump’s] is going to have a little asterisk next to it,” she said.

On Tuesday, Twitter added a fact-checking label to two of the president’s tweets that made unsubstantiated claims of voting fraud. A Twitter spokesperson said the company has “drawn lines for certain issue areas, including civic integrity and voting,” but added that the tweets about Klausutis did not violate existing policies.

“We always knew that Silicon Valley would pull out all the stops to obstruct and interfere with President Trump getting his message through to voters. Partnering with the biased fake news media ‘fact checkers’ is only a smoke screen Twitter is using to try to lend their obvious political tactics some false credibility,” Parscale said in his statement. “There are many reasons the Trump campaign pulled all our advertising from Twitter months ago, and their clear political bias is one of them.“

Trump then took to the platform to express his displeasure with the company’s decision to label his tweets.

Swisher said it is difficult for Twitter to rein Trump in because it has let him tweet falsehoods without consequence for years. But she said the president is now libeling Lori Klausutis by falsely accusing her of having an affair with Scarborough. She said Twitter often points to First Amendment concerns when refusing to censor tweets, but noted that the company removes posts all the time. She said a different standard applies to Trump only because Twitter’s leadership had decided that “everything that comes out of his mouth, even the bile, is newsworthy.”

Calling Trump “the most epic internet troll of all time,” Swisher said that Twitter’s business is not improved by Trump’s tweetstorms and, in fact, may ultimately be harmed by the president’s affinity for the platform.

“They’re being surpassed by TikTok, by Snapchat, by Facebook, and they had so much potential here,” she said.

Swisher said she doubts that Twitter engineers truly understand the First Amendment or what it is like to feel unsafe. The employees of social media companies are 70 to 90 percent white men, she said, and most of them simply don’t understand what it’s like to be bullied, stalked or marginalized. Worse, she said, the culture in Silicon Valley is surprisingly “go along to get along.” Swisher said she believes Dorsey is thoughtful, but has created a culture that shields him from dissent within the ranks.

“He needs more people disagreeing with him,” Swisher said. “They just reinforce each other.”