Under pressure from Senate Democrats, the President partly suspends the individual mandate.

It seems Nancy Pelosi was wrong when she said "we have to pass" ObamaCare to "find out what's in it." No one may ever know because the White House keeps treating the Affordable Care Act's text as a mere suggestion subject to day-to-day revision. Its latest political retrofit is the most brazen: President Obama is partly suspending the individual mandate.

The White House argued at the Supreme Court that the insurance-purchase mandate was not only constitutional but essential to the law's success, while refusing Republican demands to delay or repeal it. But late on Thursday, with only four days to go before the December enrollment deadline, the Health and Human Services Department decreed that millions of Americans are suddenly exempt.

Individuals whose health plans were canceled will now automatically qualify for a "hardship exemption" from the mandate. If they can't or don't sign up for a new plan, they don't have to pay the tax. They can also get a special category of ObamaCare insurance designed for people under age 30.

So merry Christmas. If ObamaCare's benefit and income redistribution requirements made your old, cheaper, better health plan illegal, you now have the option of going without coverage without the government taking your money as punishment. You can also claim the tautological consolation of an ObamaCare hardship exemption due to ObamaCare itself.

These exemptions were supposed to go only to the truly destitute such as the homeless, bankrupts or victims of domestic violence. But this week a group of six endangered Senate Democrats importuned HHS Secretary Kathleen Sebelius to "clarify" that the victims of ObamaCare also qualify. An excerpt from their Wednesday letter, whose signatories include New Hampshire's Jeanne Shaheen and Virginia's Mark Warner, is nearby.

HHS and the Senators must have coordinated in advance because literally overnight HHS rushed out a bulletin noting that exemptions are available to those who "experienced financial or domestic circumstances, including an unexpected natural or human-caused event, such that he or she had a significant, unexpected increase in essential expenses that prevented him or her from obtaining coverage under a qualified health plan." A tornado destroys the neighborhood or ObamaCare blows up the individual insurance market, what's the difference?

The HHS ruling is that ObamaCare is precisely such a "significant, unexpected increase." In other words, it is an admission that rate shock is real and the mandates drive up costs well into hardship territory. HHS is agreeing with the Senators that exemptions should cover "an individual whose 2013 plan was canceled and considers their new premium unaffordable." In her reply letter, Mrs. Sebelius also observes that some people "are having difficulty finding an acceptable replacement." She means the new plans are overpriced.

The under-30 ObamaCare category that is being opened to everyone is called "catastrophic" coverage. These plans are still more expensive than those sold on the former market but they're about 20% cheaper on average than normal exchange plans because fewer mandates apply and they're priced for a healthier, younger risk pool. Liberal Democrats hated making even this concession when they wrote the law, so people who pick catastrophic plans don't get subsidies. 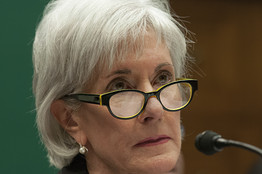 What an incredible political turnabout. Mr. Obama and HHS used to insist that the new plans are better and less expensive after subsidies than the old "substandard" insurance. Now they're conceding that at least some people should be free to choose less costly plans if they prefer—or no plan—and ObamaCare's all-you-can-eat benefits rules aren't necessary for quality health coverage after all.

But the White House is shredding ObamaCare's economics on its own terms. Premiums for catastrophic products are based on the assumption that enrollees would be under 30. A 55-year-old will now get a steep discount on care courtesy of the insurer's balance sheet, while other risk-tiers on the exchanges will have even fewer customers to make the actuarial math work.

Pulling the thread of the individual mandate also means that the whole scheme could unravel. Waiving ObamaCare rules for some citizens and continuing to squeeze the individual economic liberties of others by forcing them to buy what the White House now concedes is an unaffordable product is untenable. Mr. Obama is inviting a blanket hardship amnesty for everyone, which is what Republicans should demand.

The new political risk that the rules are liable to change at any moment will also be cycled into 2015 premiums. Expect another price spike late next summer. With ObamaCare looking like a loss-making book of business, a public declaration of penance by the insurance industry for helping to sell ObamaCare is long overdue.

The only political explanation for relaxing enforcement of the individual mandate—even at the risk of destabilizing ObamaCare in the long term—is that the White House is panicked that the whole entitlement is endangered. The insurance terminations and rollout fiasco could leave more people uninsured in 2014 than in 2013. ObamaCare's unpopularity with the public could cost Democrats the Senate in 2014, and a GOP Congress in 2015 could compel the White House to reopen the law and make major changes.

Republicans ought to prepare for that eventuality with insurance reforms beyond the "repeal" slogan, but they can also take some vindication in Thursday's reversal. Mr. Obama's actions are as damning about ObamaCare as anything Senator Ted Cruz has said, and they implicitly confirm that the law is quarter-baked and harmful. Mr. Obama is doing through executive fiat what Republicans shut down the government to get him to do.

The President declared at his Friday press conference that the exemptions "don't go to the core of the law," but in fact they belong to his larger pattern of suspending the law on his own administrative whim. Earlier this month he ordered insurers to backdate policies to compensate for the federal exchange meltdown, and before that HHS declared that it would not enforce for a year the mandates responsible for policy cancellations. Mr. Obama's team has also by fiat abandoned the small-business exchanges, delayed the employer mandate and scaled back income verification.

"The basic structure of that law is working, despite all the problems," Mr. Obama added. His make-it-up-as-he-goes improvisation will continue, because the law is failing.


The Hidden Impact of Obamacare and the Economy

By Jacqueline Leo2 hours ago

Obamacare has delivered another sucker punch to the middle class. This time it’s sticker shock.

Now that a few people can get past the tech problems of HealthCare.gov and actually see the real cost of insurance plans available, they are finding that Affordable Care is big hit to the family budget.  And when the family budget gets hit in the solar plexus, guess what happens to consumer spending and the economy.

In California, policies for about 900,000 Californians are being canceled because of Obamacare’s mandates and about 2/3rd of these do not qualify for subsidies, according to The Chicago Tribune.  The result—these folks will be paying higher premiums.

RELATED: THE MANY DISRUPTED LIVES UNDER OBAMACARE

In Alabama, premiums have doubled for some middle class families like Courtney Long, a stay-at-home mother of four. She told WHNT News. “It’s devastating. I started crying,” said Long. “I mean, we have worked so hard to get out of credit card debt, get ahead on the car loan, transfer our mortgage to a 15 from a 30 year mortgage… and for what?”

In Tennessee, Sen. Lamar Alexander (R-TN) issued an analysis of a White House report and found the following:

— Today, a 27-year-old woman in Nashville can also buy a plan for as low as $58 a month. On the exchange, the lowest-priced plan in Nashville is $114 a month — a 97 percent increase. Even with a tax subsidy, that plan is $104 a month, almost twice what she could pay today.

— Today, women in Nashville can choose from 30 insurance plans that cost less than the administration says insurance plans on the exchange will cost, even with the new tax subsidy.

— In Nashville, 105 insurance plans offered today will not be available in the exchange.

RELATED: THE OBAMACARE ‘SHOTGUN WEDDING’—MARRY OR LOSE YOUR HOME

In Washington State, Obamacare will increase the underlying cost of individually purchased health insurance by 34-80 percent on average, according to Forbes.  The list goes on and on and includes Texas, Florida, New York, Illinois, Georgia and North Carolina.  But premiums are just the beginning.  The deductibles are outrageous, too.

A piece in Saturday’s The New York Times tells the story of Doug and Ginger Chapman, ages 55 and 54, a middle class couple “sitting on the health care cliff.”  Their annual income of around $100,000 a year makes them ineligible for a subsidy in New Hampshire (if they earned under $94,000, it would cut their costs by half). They have to replace their family insurance which includes the two of them and their two sons. The premium cost alone, not including any deductible is $1,000 a month, or 12 percent of their income.

The Times’ analysis found the following:

“The cost of premiums for people who just miss qualifying for subsidies rises rapidly for people in their 50s and 60s. In some places, prices can quickly approach 20 percent of a person’s income. Experts consider health insurance unaffordable once it exceeds 10 percent of annual income. By that measure, a 50-year-old making $50,000 a year, or just above the qualifying limit for assistance, would find the cheapest available plan to be unaffordable in more than 170 counties around the country, ranging from Anchorage to Jackson, Miss.”

The Real Impact of Obamacare is Yet to Come

If even a fraction of the middle class and upper middle income earners divert some of their discretionary dollars to pay for health care, it will have a significant impact on consumer spending.  What will that mean for the economy? Consumer spending accounts for about 70 percent of the nation’s GDP, although experts say that number is likely to decline.

The top 20 percent of income earners account for about 40 percent of all spending in the U.S.  When you increase the costs of health care and the new taxes associated with Obamacare, you can hear the wallets closing.

If the people of this nation don't rise up and have the Obama impostor removed, they deserve what they get.