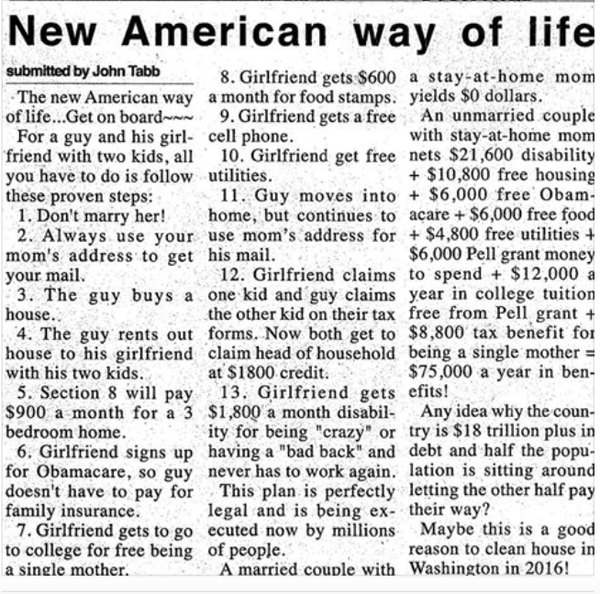 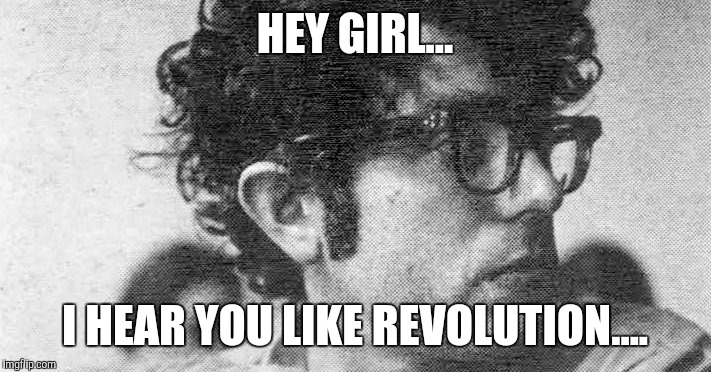 Bernie: A Hippy Who Never Grew Up

From Chicks On The Right:

"Bernie Sanders Didn’t Earn A Paycheck Until He Turned 40. No Wonder Millennials Love Him So Much.

I read this article and so many things started making sense! And then I got incredibly depressed.

This column in Investors Business Daily entitled “Bernie Sanders: The Bum Who Wants Your Money” details #FeelTheBern’s rise from being a deadbeat nutjob hippie who didn’t earn a steady paycheck until he turned 40 to being a deadbeat nutjob hippie that somehow managed to convince voters in Vermont that they wanted him to represent them in the Senate.

*2016: Democratic presidential hopeful Bernie Sanders said Monday his parents would never have thought their son would end up in the Senate and running for president.

“It’s certainly something that I don’t think they ever believed would’ve happened,” the unabashed socialist remarked during CNN’s Democratic town hall forum, as polls show him taking the lead in Iowa and New Hampshire.

He explained his family couldn’t imagine his “success,” because “my brother and I and Mom and Dad grew up in a three-and-a-half-room rent-controlled apartment in Brooklyn, and we never had a whole lot of money.”

It wasn’t as bad as he says. His family managed to send him to the University of Chicago. Despite a prestigious degree, however, Sanders failed to earn a living, even as an adult. It took him 40 years to collect his first steady paycheck — and it was a government check.

Sanders spent most of his life as an angry radical and agitator who never accomplished much of anything. And yet now he thinks he deserves the power to run your life and your finances — “We will raise taxes;” he confirmed Monday, “yes, we will.”

One of his first jobs was registering people for food stamps, and it was all downhill from there.*

The article goes on to explain that Bernie tried a few different career paths and basically sucked at all of them. Friends described him as a “slob” and said his electricity was always turned off and he could rarely make rent.

The only thing he was good at was expounding the virtues of socialism and complaining about how American capitalistic greed was to blame for all poverty, everywhere.

Which I guess was enough to become elected mayor of Burlington, Vermont at age 40, which is when he started earning a steady paycheck – the first in his life.

There you go. Thousands of college kids getting pointless degrees in gender studies and crying about trigger warnings and are unable to get an Actual Job to pay back the hundreds of thousands of dollars in student loan debt are flocking to a deranged old man who only got a steady paycheck because he convinced people to elect him mayor (which makes me wonder – what were the citizens of Burlington smoking that election year?)

Basically, if Bernie Sanders can get by in life without a job or responsibilities and let taxpayers pay his own way, and then run for president, there is hope for the hipster generation crying out for “free” college and “free” healthcare and higher taxes to pay for all this free crap. They should start a club: Bums and Freeloaders for Socialism! Losers Electing Losers! Yay!

*Sure, Sanders may not be a hypocrite, but this is nothing to brag about. His worthless background contrasts sharply with the successful careers of other “outsiders” in the race for the White House, including a billionaire developer, a world-renowned neurosurgeon and a Fortune 500 CEO. The choice in this election is shaping up to be a very clear one. It will likely boil down to a battle between those who create and produce wealth, and those who take it and redistribute it.*

It’s Makers vs. Takers this year. And considering how easy it is to take rather than make…......

We are so doomed."

One hot night in July 1972, I walked into my family’s kitchen to see my mother brandishing a broom at a skinny man who had his head stuck deep inside our refrigerator.

“You get out!” my mom yelled, hitting the man on his skinny ass. “Out, out!” Under her tan skin, my mother’s face was red with indignation. We didn’t have much in our fridge, but my mom would fiercely defend it. The man pulled his head out of the fridge, dropping the food on the shelf. His hair was curly; a cherub’s full-bodied curls framed his startled face. Chagrined, he loped off to the other apartment housed in my family’s converted two-room schoolhouse in Huntington, Vermont, the site of a late-night mock-up session for The Vermont Freeman, the alt-weekly my parents published.

Years later, I’d find out that man was Bernie Sanders.

Standing on the waterfront park of Burlington, Vermont, on Tuesday, May 26, 2015, Sanders announced his candidacy for president. Shortly thereafter, Mother Jones published “How Bernie Sanders Learned to Be a Real Politician,” an article detailing Sanders’ decades-long shift from scruffy radical to hirsute politician. While the article delineates much of Sanders’ early history, including his time with the doomed Liberty Union party, his multiple failed political bids, and his hardscrabble hippie-adjacent life, the media fixated on one element: The “50 Shades” satiric erotica that Sanders wrote for the Freeman in October 1972. 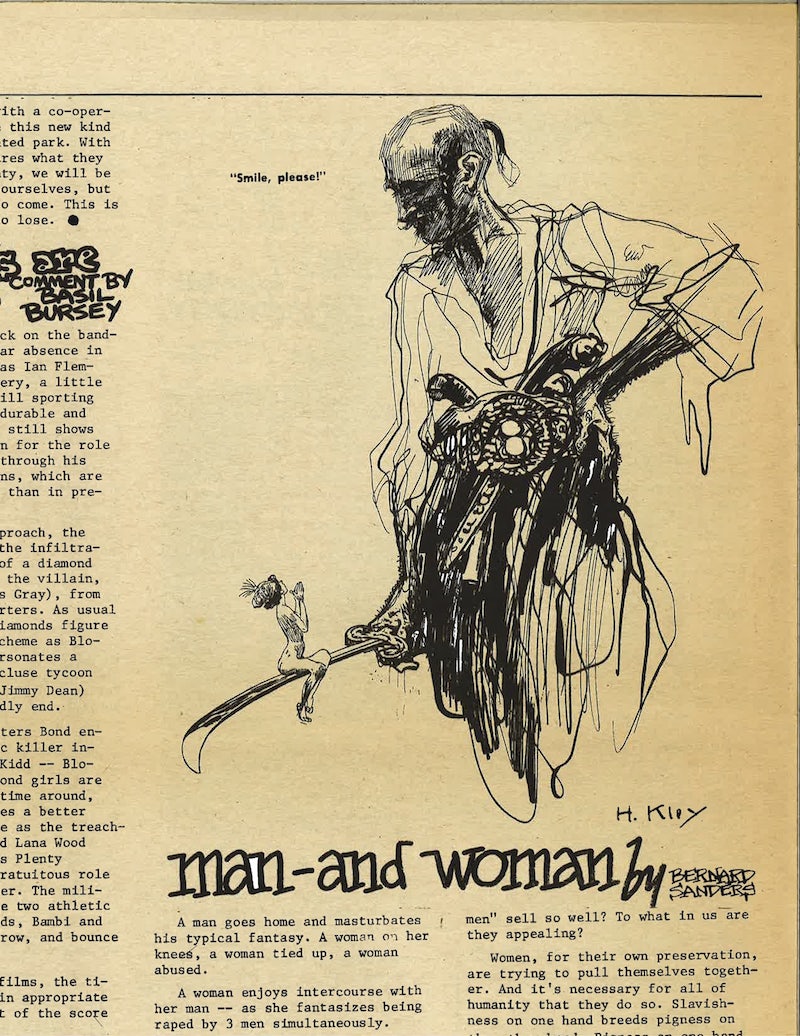 “A woman enjoys intercourse with her man,” goes the most quoted portion of the essay, “she fantasizes being raped by three men simultaneously.” Called “Man—and Woman,” the short piece originally appeared in the “China” issue of the Freeman. You’d likely imagine that an underground Vermont newspaper would have a hard time drumming up enough copy to fill a China issue—and you’d be right. The piece is bad, but it speaks to the gendered zeitgeist of the time, the ’70s confusion about who humans are when we can’t rely on the gender roles we grew up in with. It’s a confusion that lingers, suggesting that though his prose is execrable, Sanders is posing questions that were valid for the time, questions that the anger of Men’s Rights Activists and fourth-wave feminist divisions suggest are still relevant. 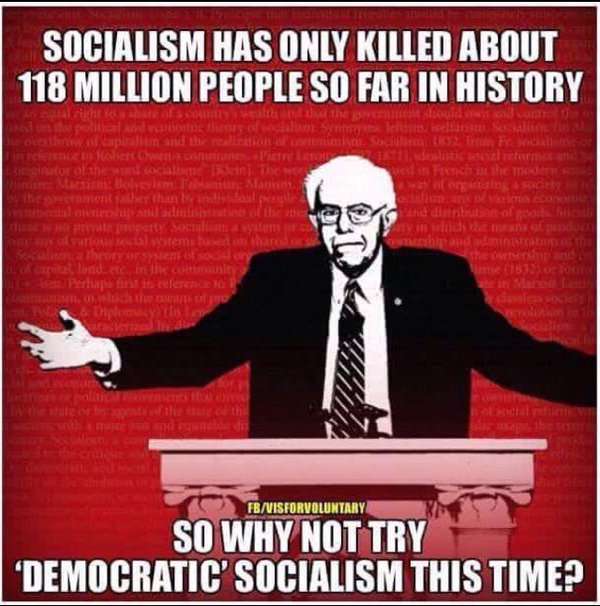 "What is wrong with working on a bill to help people reducing their student loans? This shows me Marco Rubio is able to work with people across the isle to make things better for the people in this country. Sometimes people of both sides need to have an open mind about things and problems can be resolved and people's life can be improved."

Everyone NEEDS to copy and paste and send the truth about Marco viral. Now I know why he thinks he can beat Hillary - he will pull the disillusioned Sanders voters to the Republican Party. We NEED to stop Rubio now!

You can't make this stuff up. Evidently you have to resubmit your income each year to keep the IBR and 57% of the kids forget to do it so because they don't read the emails and don't use paper correspondence. So the government is trying a pilot program to find ways to make the emails more noticeable.

But here's the scary part.  This is Elizabeth Warren's pet project!!!!!! Rubio joined with DEMOCRAT Mark Warner in 2014 to make the IBR program better and co-sponsored the Dynamic Student Loan Repayment Act.  It failed but they have resubmitted it NOW. How’d we all miss this one?

Why is Marco sponsoring a plan that is part of Elizabeth Warren’s 11 Tenets of Progressivism? 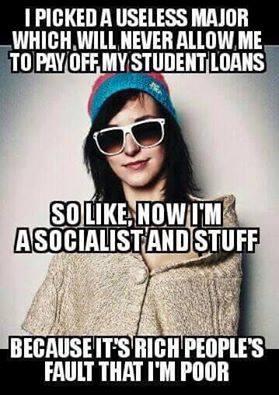 At the CNN townhall, Marco said he is supporting universal IBR in his campaign and trying to get a bill passed in the senate

Read and understand Marco's plan for universal IBR for ALL student loans including adding private student loans into the IBR. This is an expansion of Obama's student loan repayment plan to include ALL loans. Who's paying for this - we the taxpayer? How much will this cost us as taxpayers when they pay 1-10% of their income after taxes and deductions for 10-20 years and the rest of their debt is written off. Marco, when do these kids learn how to responsibly borrow and repay their debts? No wonder they feel they are entitled. After I read this, Bernie isn't sounding so crazy saying free education. If Marco gets elected, we should all go back to the cheapest state school, take out the maximum student loans, take the minimum number of credit hours, invest the money and then get a job at McDonalds and max out deductions and pay back 1% each year until we die or until we reach 20 years and live comfortably on the government and Marco. Bernie's free education may actually be cheaper than paying for all the student loans Marco is willing to write off and have our taxes cover when these kids are at exclusive colleges.

Even Bush is for it. Carson says pay your own way on his website. Cruz has no education or healthcare issues section and neither does Trump. Kasich does not mention it.

We don't need the democrats to socialize this country, Marco will do it for us. No wonder college kids support him.

AWE, C'mon guys! This is such an INSULT to the SLOTH population!