Five years ago, in 2007, I attempted to define the great issues of what, at that time, would become challenges we, as a Nation, would face in the future, and boil it all down to one page.

"The Declaration of the INDEPENDENTS"

It is embedded on the first page of this web site.

It formed the basis for this website, REAL CONSERVATIVES, of which you have been an honorable, faithful Member.

From the content contained on REAL CONSERVATIVES, the book RIGHT SIDE UP became a definitive work that chronicled, in microcosm, the historic sentiments of the Silent Majority. Your turnout at the voting booths in 2010 evidenced the predominant Conservative nature of the majority of most of the Citizens in our great Nation, who follow Traditional American Values.

The book is now a small, but significant, part of our history, and our Heritage.

For example, currently there has emerged new attention to issues that most had assumed to be "settled law". Those issues, among all the other issues highlighted in the Declaration of the INDEPENDENTS, are the fundamental moral argument against abortion, and the First Amendment Right to Freedom of Religion.

Here are excerpts from the book, on those topics:

"...Values, such as the Sanctity of Life, were called into question. The dialectic argument went like this: "the world is running short of food, potable water, and breathable air because of ‘overpopulation’. It became unfashionable for women to desire to have children because giving birth to more and more people would contribute to the problem of ‘overpopulation’ which in turn would cause mass starvation, suffocation, or dehydration.

It was all a lie, conceived to further a hidden agenda. It was willfully believed by millions of people because it justified sin: the sin of fornication and the sin of murder. The killing of human life once conceived in the mother’s womb, can only be defined as murder. The dialecticians had even invented a synonym for this barbaric practice-"choice"...."

....and, On religious conscience:

"...Religions of all cultures would be outlawed, branded as the "Opiate of the Masses", the practice of which would be eventually declared a Capital Offense, punishable by hard labor in re-education camps (gulags), or even death by execution. Most of the radical Muslim sects of today follow some form of dialectic, mixed heavily with religious dogma..."

As you can readily see, there is much insight to be gained by reading the book in its entirety.

Therefore, RIGHT SIDE UP is available to Members in two formats: Download or Paperback.

If you wish to own a copy, you may do so by CLICKING HERE:

The Download version is available at a fraction of the price of the Paperback version, at $9.95, should you wish to instantly download and print it with your own printer.

Either way, this is a part of history, history in which you, a Real Conservative, had a part.

That is why I like to call it "the 2010 Conservative yearbook....the year WE, the People ROARED!" 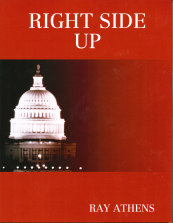