...Its not in the Bill of Rights

MURDER: “The unlawful premeditated killing of one human being by another.”

ABORTION: The LAWFUL, premeditated killing of one human being by another.

...is abortion a better way to die than murder?

Who gave ANYONE the right to kill anyone else?

There is no  " Right to Choose "  in the Constitution.

When are Americans going to stop

as their gospel Truth?

None of it works.

if they really want peace.

The Party that condones Mass Murder

Wonder why there seems to be a DEATH CURSE on America?

...look no further than the Democrat ( communist ) Party 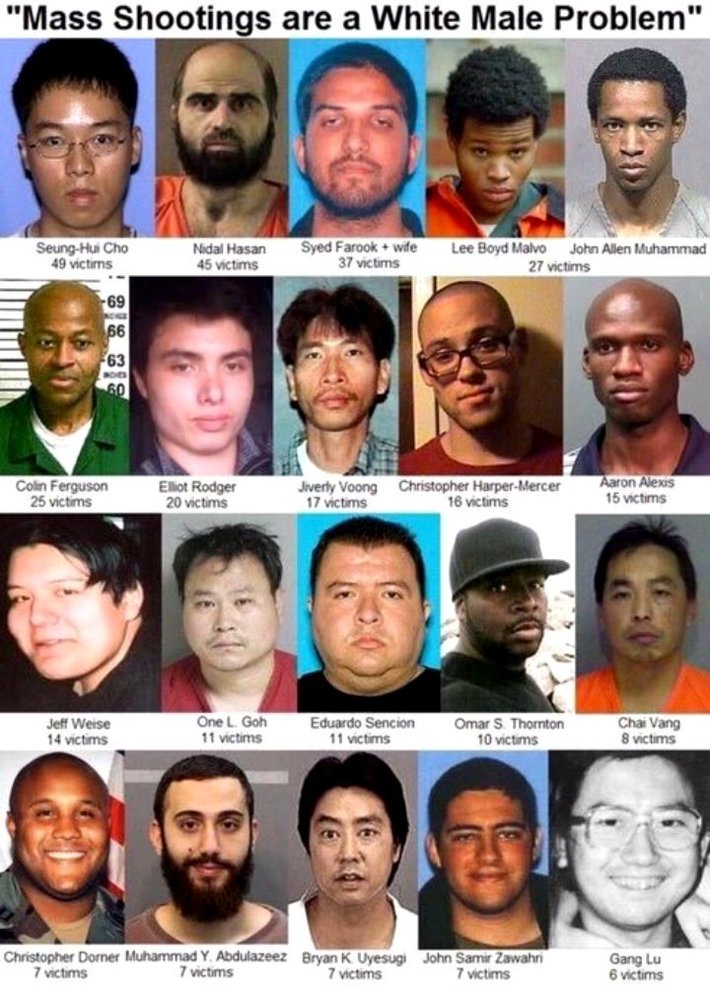 once and for all:

"A well regulated Militia, being necessary to the security of a free State, the right of the people to keep and bear Arms, shall not be infringed."

Liberals HATE Liberty, except theirs.

Conservatives are correct in saying that the Right to Bear Arms is an inalienable Right written into the Constitution, and can only be abridged by a Constitutional Amendment, ( like Prohibition, and the subsequent repeal thereof. )

MASS SHOOTER SCOURGE ON OUR NATION:

Mass Shooters rely on the vulnerability of people, especially in crowds, like schools, shopping centers, churches, any place where a large number of people gather, un-armed.

There are already on the books approximately 128,000 laws that deal with regulation of firearms. Mass Shooters routinely ignore all of those laws. They know it only takes a few minutes, even seconds, to satisfy their blood thirst. With the right kind of ordinance, they know they can inflict maximum misery on innocent human beings in very short order. There is little time for 911 to respond.

None of this works:

FACT: A cell phone with 911 capability only announces a new massacre. Its all over by the time the police arrive.

FACT: 9mm Semi-automatic pistols in the hands of  a Mass Shooter's intended victims will instantly kill the Mass shooter. That means he'll be dead at the scene of the crime, thereby saving the taxpayers the expense of prosecuting him, and the Medical costs and economic misery he would have otherwise inflicted on scores, if not hundreds of innocent victims. 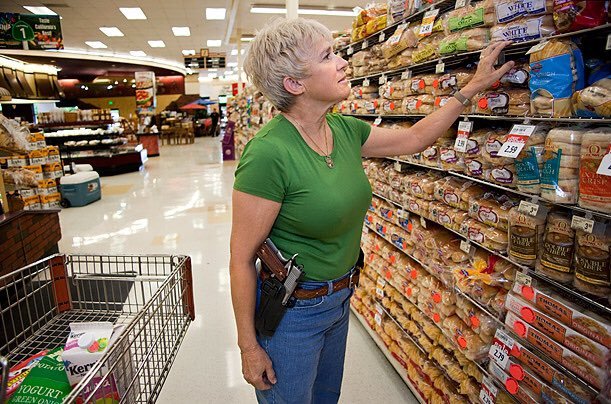 If the government can provide arms, tanks, rifles and planes to millions of soldiers, they can afford to subsidize, with a tax credit equal to the dead cost, Citizens, who are properly trained in Gun safety, who carry concealed weapons, with the cost of one 15 round Glock 9mm semi-automatic pistol and 3 extra magazines.

...what's one innocent human life worth?

Just ask yourself this: If you are in a vulnerable situation with a mass shooter shooting everyone in sight, would you rather have a Cell phone to call 911 with? ...or a 15 round semi-automatic pistol so you can just shoot the sonofabitch?

with approx $200 per month in food stamps, THERE FOR THE ASKING )

The Government doesn't need to confiscate or register firearms. It doesn't need to do background checks on law-abiding citizens who are exercising their Right to Bear Arms under the second amendment.

All it needs to do is to issue HUNTING LICENSES to involved, law-abiding responsible Citizens along the following lines. They can do background checks on volunteers who apply for the LICENSE...not the firearm. This does not interfere with the second amendment,  Any seriously concerned citizen who wishes to be deputized in this manner should not mind a background check to obtain the license, and would not mind the required Gun Safety course that comes with a concealed carry permit.

HERE IS THE PROPOSED "HUNTING LICENSE for MASS SHOOTERS". 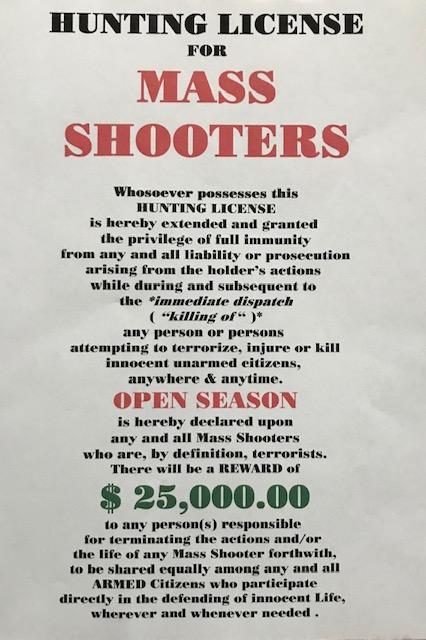 ...Wouldn't it be nice to have MILLIONS of well-trained,

standing ready, as sentinels, in case of Mass Shooter incidents?

you're a Member in good standing

Florida is placing officers and guardian program people into schools and allowing teachers to train and carry BUT are not providing liability insurance. Who would be so stupid to take that offer when Scott and Desantis used the FDLE and Pinellas sheriff to create a document as fact and accuse the wrong people when not a single witness in Parkland was ever put under oath. This commission and Desantis have the WRONG Nikolas Cruz in the document! There were three Nikolas Cruz's who attended that school and a fourth autistic Nikolas Cruz who is from the same area and is in the process of changing his name BUT he is also autistic and almost attended Douglas High - he has sealed records and 5 other cases from I assume his juvenile record - was he the person who posted comments on you tube - FBI NEVER investigated the account according to discovery released. Which Nikolas Cruz was stopped on his bike - everyone assumed and attacked that it was the shooter BUT there was NO address or SSN taken by police - if someone had taken that as proof and had shot maybe they would have shot the WRONG person. We NEVER see the face of the shooter and there are ZERO witnesses who saw the face. ONLY a trial will reveal the truth. Medina is already changing his story under oath in a separate lawsuit.

This event started earlier and school video cameras were probably not synched. It was a hurricane proof building and No ONE called 911 and stated their exact location. Make sure you teach EVERY family member to call 9211 immediately, give exact location and stay on the phone as they patch into police. A local news station just told everyone to put a message into a state app if your child sees a suspicious car on campus - DUH teach your kid and EVERY family member that if you feel you are in immediate danger or see something suspicious call 911 and get the police to the scene!!! A hig school kid was abducted into a car and instead of calling 911 phoned his mom to say he loved her - he might be alive today if he had been taught to call 911. Two different kids including an elementary student were riding bikes to school and followed yet NEITHER called 911 and instead rode through wooded areas and went to school before calling. TEACH YOUR FAMILY SITUATIONAL AWARENESS and to go into a business or public place while calling 911 - that simple action would have saved lives. Remember in a hurricane proof building no one can hear correctly outside - if a single teacher had used their brain and called 911 instead of their husband or freezing then help would have been into the correct building probably within 2-3 minutes.

I'm sharing this, Ray. I hope you received my message about trying to change my email and password.  I've been keeping up with you posts from my old password, but your link was to my latest with Google, but it was cancelled at the end of May, either by my hacker or by Google, and I wasn't able to recover it until this month. I don't trust it any more and am going to stay with the other.  I also shared your long (multiple video) gun control post on 3 pages on FB when I couldn't change my password.

#2A Wisdom @2AWisdom
To be prepared for war is one of the most effectual means of preserving peace. A free people ought not only to be armed, but disciplined. - George Washington

Can't allow Americans to be disarmed.  It's suicide.

We cannot allow the disarmament of Americans.  It's suicide.