HOW I RECRUITED 1,OOO CONSERVATIVE VOTERS!!!

HOW I RECRUITED OVER A THOUSAND CONSERVATIVES

I've been watching the Tea Party convention today on C-span. They're strategizing. Palin will speak. Its all good! They're looking for ways to get the conservative message out. Here's one way:…

BARRY, WHERE WERE YOU BORN (THE BALLAD)

HAVE A PROSPEROUS LABOR DAY, REAL CONSERVATIVES...DREAM YOUR DREAMS!!!

Just a little something to cheer everyone on:

HOW ABOUT THAT GREEN CZAR...POOR GUY, HE HAD A DREAM TOO!! AWWWW!!, TOO… Continue

CONGRESSMEN!!! HERE'S HOW TO HANDLE VOTERS' QUESTIONS WHEN THEY ASK YOU THE WRONG QUESTION IN A TOWNHALL MEETING

BASIC TRAINING FOR CONGRESSMEN: HOW TO HANDLE TOUGH QUESTIONS FROM VOTERS IN TOWNHALL… Continue

Black brother tells it like it is about ACORN

(THIS MAY TAKE A WHILE TO LOAD, BUT ITS GOOD!)

A lot of you have been asking me what set me off about the younger generation, God Bless ‘em, so I will explain this in a little more detail. I set a donation to the Author of this site, because It’s a Free Country, and I happen to agree with everything I’ve seen here. I want to support it. I even got an official e-Mailed receipt back, so I know it got into the right hands. Anyway, It is my right.

.....( this is how I will address you, because your comments reveal that you are of a younger, dumbed-down generation that doesn’t even have a clue about the free exchange of ideas, and the value, to your Liberty, of using cash. You must be of a generation that thinks that all wealth, and free market commerce depends on the latest gadget or technology, and that everything depends on the… Continue

"HERE'S TO THE HEROS"

Thought everyone would enjoy this...'hope Uncle Sam allows it on a blog :) !!

Hahvahd™: University confiscates common phrases through practice of TRADEMARKING.
No one can accuse Harvard of being bashful.

After becoming one of the world's most illustrious - and wealthy - universities, and after buying more than 350 acres of land in Allston, Harvard wants more: part of the English language. The right of free speech is stealthily being stolen.
See some of the seemingly ordinary phrases Harvard has trademarked, or is seeking to trademark:

Declaration of the INDEPENDENTS 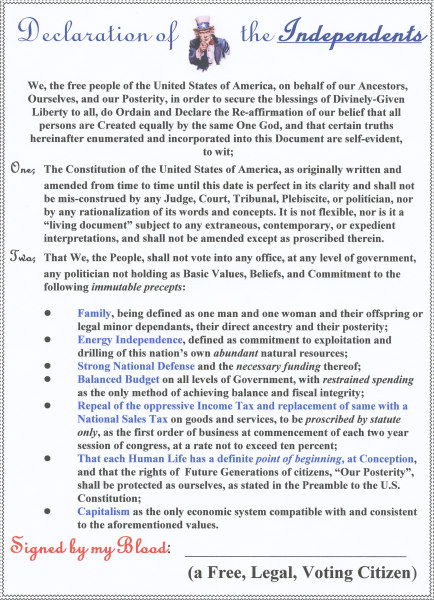 Uncle Sam's right about this declaration. I have already gotten a lot of people to request copies of this, to pass out to more people I'll never meet! By a lot of people, I mean 268, and each one of them has agreed to photo-copy it at least 100 times, for the benefit of others.