A lesson in Valor, from Member HELEN

This PERMANENT posting will serve to honor our long-time Member HELEN for her diligent civil activism in all concerned Parents' struggle to eradicate the scourge of the liberal communists' phony, "progressive", pseudo intellectual gibberish known as Common Core, which was a sinister socialist scheme to further "dumb-down", confound and confuse  our Nation's youth, our Posterity.

The liberals ( A.K.A. 'leftists ) are, to this very day, continuing their assault on Traditional American Values with a further attack on basic Math Skills, portraying traditional mathematical teachings as "RACIST" in an absurd attempt to salvage their sainted Common Core Curriculum, which was roundly rebuked  in the 2018 election in Florida, with the ascension of Ron DeSantis, the now governor of Florida, while patriots are still fighting tirelessly to eliminate Common Core. He is in the advanced stages of his attempts to completely dismantle this diabolically insidious program in Florida.

Politicians, like the Florida Governor, relied heavily on the grassroots support of concerned Citizens such as Member HELEN Wolff, for their rise to prominence. Concerned Citizens, like HELEN, with the guts to stand up and fight the evil which has infiltrated or crept into our systems and institutions are the "First Responders" in the war for America's soul. We need more like her.

Thank you, HELEN, for your courage.

It has been a lesson in Valor, to all who stand, silently, on the sidelines.

From the Sarasota Herald tribune

SARASOTA COUNTY — An anti-Common Core Republican who spoke out against the standards at state hearings has turned her focus to the Sarasota County School Board.

“I believe I can make a difference in the local level,” said Helen Wolff, a Siesta Key resident who is challenging Democratic incumbent Shirley Brown for the District 4 seat on the five-member board. “I do believe we need to do better.”

But Brown argues her opponent is turning Common Core into a political issue, as she does not hear complaints from teachers or parents in the district.

“We’re getting this outside static coming in. We need to make sure we don’t allow that to come to our board and cause discord,” said Brown, who is seeking her third term and is the only Democrat on the School Board. “It’s so very important to have strong stable leadership on the board and in the district so we keep focusing on continuing improvement with our students.”

Wolff and Brown will square off in the Aug. 26 election in one of three contested seats for the School Board. School Board races are officially nonpartisan, but this race has a strong party undercurrent.

The District 4 winner — which will be decided outright in the primary — will get a four-year term that pays $38,625 annually.

The candidates are elected countywide, although they are required to live in the district in which they are running.

The newly chosen board will be faced with hiring a replacement for Superintendent Lori White, who has announced plans to retire in 2017, and deciding when — or if — to place a 1-mill school tax on a future ballot to continue the optional levy.

Wolff, who is from Belgium and became a naturalized U.S. citizen in 1996, worked as an interpreter for the Belgium consulate in New York. She also earned a degree in modern languages and secretarial studies, which taught her skills such as commercial writing, statistics and economics.

She has lived in Siesta Key for 25 years and became a stay-at-home mom, raising two sons who graduated from Sarasota High. Wolff, 55, is married to Andrew Wolff, an orthopedic surgeon.

Wolff said her understanding of finances would be an asset to the district.

Earlier this year, Wolff — who has not held political office before — spoke at two Florida State Board of Education hearings on Common Core. Common Core is a national set of standards approved by the Legislature in 2010 that determines what children at each grade level should know in math and language arts.

The standards have been controversial, with critics saying using national standards usurps local control of education. In Florida, the state has approved a slightly changed version and renamed it the Florida Standards.

“Sarasota County, being a top-performing district, can do better than those standards,” said Wolff, adding that regaining local control is an important issue for her.

She has been active in the Tea Party but said she plans to run a nonpartisan campaign.

Where de we go from here? Six years later, Common Core "has left the station", is fully implemented, and the new national sex standards are in full swing, together with social-emotional learning/manipulation. The dumbing down of our youngsters in government schools is nearing completion and the same people who signed on to Common Core are STILL serving on the School Board!
While I do believe in cycles throughout history, I fear we might have lost a generation. Should we be blessed with grandchildren onr day, we most likely would commit to helping home school, IF still around or allowed... yes, home schooling  is under attack as well.
I do think charter schools are a band aid to the problem, albeit, perhaps, well-intended.
The same people who made $ off Common Core are making $ off charter schools.
Some of our unethical politicians have their fingers in the Charter School pot as well.
The more things change, the more they stay the same; short of a massive parent uprising, nothing will change!
Regardless, this patriot will NEVER, EVER give up fighting for liberty (= freedom + morals)
G-d help the USA! 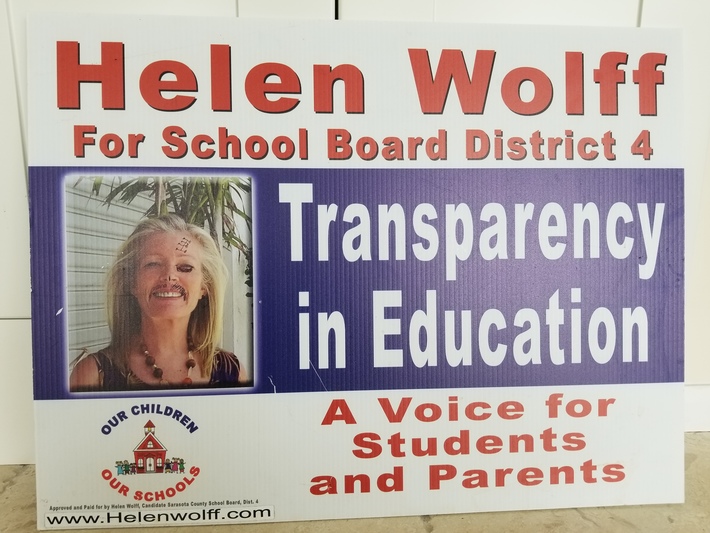 Growing up, Brown dropped out of high school and started working full-time operating a switchboard at a car dealership to support her mother, a single parent raising six children at home.

“To this day, that was one of my biggest regrets that I didn’t walk down to the aisle and get my diploma and didn’t go to college,” said Brown, 61, who later received her GED as an adult.

Her background made her realize how a child’s home life can impact his education.

“I think it’s important we look at children who are falling through the cracks. Kids who drop out aren’t always the kids who aren’t able to keep up,” Brown said.

Brown was a Florida state representative from 1992 to 2000, experience that she said taught her the complicated nuances of the state funding and makes her a key player on the School Board.

“I sort of am the interpreter between what Tallahassee says and what our finance department says,” Brown said. “It’s good to speak both languages.”

In 2006, she ran and won her first term on the School Board.

“I thought what we needed was some leadership and stability. I thought I could help bring that to the board. And I think I did,” Brown said, adding she is proud of the district’s A-rating and its savings on recent construction projects. “The headlines in the paper are so much different than what they were 10 years ago.”

Last modified: August 3, 2014
All rights reserved. This copyrighted material may not be published without permissions. Links are encouraged.
.
REQUIRED READING:
https://danieljmitchell.wordpress.com/2019/11/18/education-week-par...
...and
https://danieljmitchell.wordpress.com/2019/11/19/education-week-par...
_______
CLICK HERE:
http://tpartyus2010.ning.com/profiles/blogs/mathematical-babble
.
.