"...Any action Congress might consider to address the current border crisis would be futile should the President go forward with these lawless actions. Congress must speak out and fight against them. It must use its spending power to stop the President’s executive amnesty..." 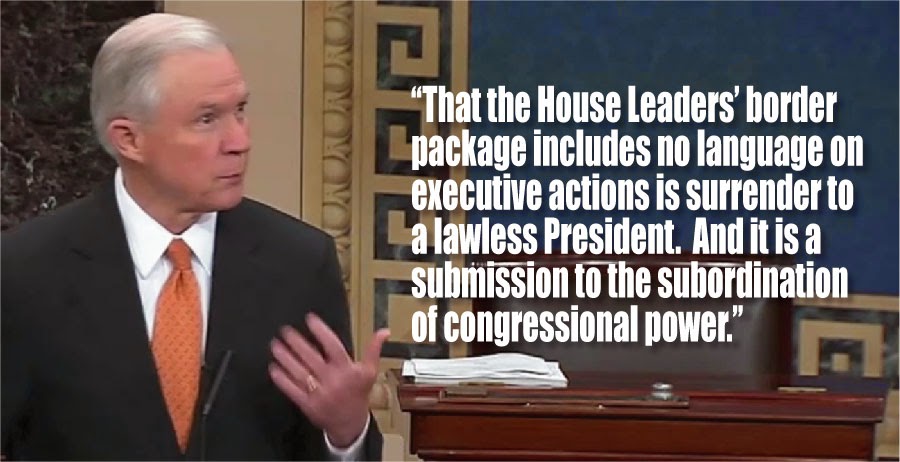 In a communique to the press the Senator said in reference to what is known as "the Granger Package," organized and introduced by Texas Representative Kay Granger:

"...That the House leaders’ border package includes no language on executive actions is surrender to a lawless President. And it is a submission to the subordination of congressional power.

Sessions said that after years of falling wages and rising joblessness, American workers are pleading for someone to hear them.  "How can it be that our President is brazenly advertising that he will nullify and strip away American workers' immigration protections, and their own elected leaders will not rise to their defense?  Or to the defense of our laws and our Constitutional order?" Sessions asked.

Sessions said "...because it does not fix our asylum rules and loopholes, the end result of the additional judges and hearings will be more illegal immigrants gaining asylum and access to U.S. welfare. It is a plan for expedited asylum, not expedited removal...Nor will this package make our rogue President actively enforce anything, coming nowhere close to the kinds of reasonable enforcement activities needed to restore the interior application of our immigration laws..."

The "Granger Package"  purports to "...address the national security and humanitarian crisis at the southern border..."

The Congresswoman issued a statement today that said:  "...This is a crisis that deserves decisive leadership from President Obama, but his Administration has failed to lead, so the House will take action this week to resolve the urgent situation at the southern border. It would be irresponsible to allow this crisis to continue unabated for another month without immediate action to secure the border and deter more unaccompanied minors from making the journey and crossing the border illegally.

“The working group recommendations that have been included are the options I believe represent the most urgent actions that need to be taken to curb the flow of unaccompanied minors, along with women with children, from making the perilous journey to the U.S. border. Additionally, this plan provides the tools necessary to process and humanely return unaccompanied children and family units home as quickly as possible as well as to secure our southern border..."

The statement lists the salient points of the measure:

•    Amend the Trafficking Victims Protection and Reauthorization Act of 2008 to require that all unaccompanied minors are treated the same as unaccompanied minors from Canada and Mexico for the purpose of removals. Additionally, this would require unaccompanied children who do not wish to be voluntarily returned to their home country to remain in Health and Human Services custody while they await an expedited immigration court hearing that must occur not more than 7 days after they are screened by child welfare officials. Priority removal will be given to the children who have most recently arrived in the United States.
•    Deploy additional temporary judges to expedite the hearing of asylum and credible fear claims.
•    Change the Immigration and Nationality act to strengthen the law prohibiting criminals with serious drug related convictions from applying for asylum.
•    Prohibits the Secretary of the Interior or the Secretary of Agriculture (USDA) from denying or restricting U.S. Customs and Border Protection (CBP) activities on federal land under their respective jurisdictions within 100 miles of the US-Mexico border.
•    Deploy the National Guard to the Southern border to assist Border Patrol.

Today's statement from session follows yesterdays address by the Senator in Congress, where he said:

"...The president is preparing to assume for himself the absolute power to set immigration law in America.  'Well, I'll just enforce what I wish to enforce.'  The absolute power to determine who may enter and who may work, no matter what the law says, by the millions.  Our response now is of great import.  It will define the scope of executive and congressional powers for years to come..."

In his address broadcast by C-Span, Sessions issued a warning:

"...Let me state a warning... The American people are being roused to action -- and once activated, their power will be felt.  They will not be mocked.  They have begged and pleaded for our nation's immigration laws to be enforced for 30 or 40 years.  The politicians have refused, refused, refused...There's one thing the powers in Washington fear; that is being voted out of office.  Before a member of Congress acquiesces to any action of this kind, they should consider their responsibility to their constituency...Mr. President, you work for the American people, they don't work for you, and they will not accept nullification of their law passed by their elected representatives...I'm calling on all members of Congress today to stand up to these lawless actions and sponsor legislation that will block them... I'm calling on every person in this body and in this house and in the House of Representatives to stand and be counted at this perilous hour..."  (See the full video HERE)

In today's statement, Sessions addresses the Granger Package and concludes with:

"...And finally, a package that is silent on blocking executive amnesty creates an opportunity for Senate Democrats to add elements of their party’s open borders and mass immigration agenda.  This legislation is unworthy of support.”

Spoken like a statesman and defender of the Rule of Law. How very refreshing!