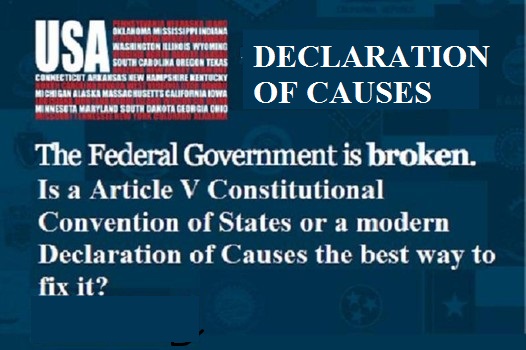 This Declaration is offered as an alternative to accepting the corrupt status quo and to proposals to hold an Constitution, Article V, Convention of States. Committees of Safety were first used in years leading up to the American Revolution.

Across the country, on both sides of the political aisle, rank and file citizens have been wringing their hands trying to figure out what is going on in DC and what can be done to fix our "run away" government. Some Americans want to double down on their involvement with one of the two major political parties. Others have suggested an Article Five Convention of States. The First Committee of Safety and WE THE PEOPLE TAR refuse to just accept the corrupt status quo and opposes proposals for an Constitution, Article V, Convention of States for reasons listed in this article:

This Second Declaration of Causes is our proposed course of action to address our current governments trespasses of our Constitution, our Bill of Rights, Natural Law and our Unalienable Natural Rights. The First Committee of Safety and WE THE PEOPLE TAR advise all interested persons that this course of action is inspired by the original Declaration of Causes of the Founders from July 6, 1776. Further, in accordance with our Declaration of Independence and Natural Law, this Declaration of Causes seeks redress and remedy of our Causes by Exercising our Natural Right to Petition the Government for Redress of grievances as reduced to writing in the First Amendment of our Constitution. As many of our fellow patriots have previously attempted to have their grievances redressed and been denied and/or rebuffed by our Government, this Second Declaration of Causes is intended to document exhausting our peaceful remedies. The Declaration of Independence and Natural Law's Social Contract require we exhaust our peaceful remedies before considering alternative remedies.

We urge persons forming new Committees of Safety and/or WE THE PEOPLE TAR groups to exclude all persons who are now serving and/or who have ever served in government and/or as an officer of either major political party. We further advise our fellow patriots to beware of Political Operatives and Agent Provocateurs. The First Committee of Safety and WE THE PEOPLE TAR believe the TEA Party and Occupy Movements are too polarized and too compromised by political operatives to be effective in restoring our Constitution and Natural Rights and taking back our country. For reasons that should become clear to all upon reading this first rough draft of this Declaration of Causes, cast off the false left/right two major political party paradigm and start thinking for themselves.  Above all, each American should exercise critical thinking. Do not accept or believe anything you see or hear within this Press Release and/or Second Declaration of Causes, until you confirm it yourself with multiple sources that you trust. Pursuant to Natural Law, you should Establish Truth for yourself using your own observations and reasoning.

“If there must be trouble, let it be in my day, that my child may have peace.”
― Thomas Paine

You can view the Second Declaration of Causes in these formats in these locations:

Those were my thoughts.

Thank you, my fellow citizens, for taking your valuable time to read and reflect upon what is written here.

This article is written with the same intentions as Thomas Paine. I seek no leadership role. I seek only to help the American People find their own way using their own “Common Sense”

Critical Thinking Notice - This author advises you as no politician would dare. Exercise Critical Thinking in determining the truthfulness of anything you read or hear. Do not passively accept nor believe anything anyone tells you, including this author... unless and until you verify it yourself with sources you trust and could actively defend your perspective to anyone who might debate you to the contrary of your perspective.