CLUB of ROME... We are TAKING NAMES... the dangers for the human kind. 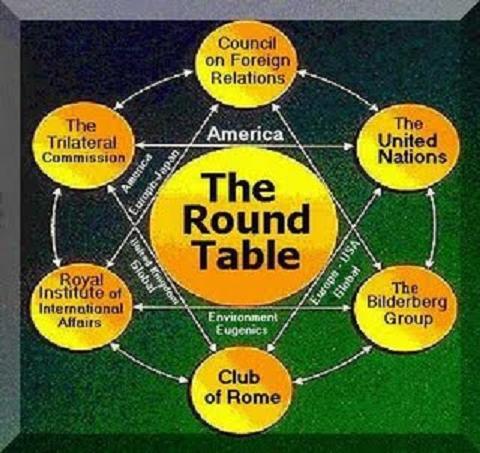 This
week, Mr.
Bill Gates of Microsoft and the Billionaires Club suggested that we need

to reduce the population by at least one billion people ...

International Secretariat in Winterthur
Thanks CS Mau Pau
The Club of Rome is a global organization that has taken it upon themselves to determine what
is best
for mankind and for our planet. They have determined that there are too
many
people on Earth and that billions of us must be eliminated in order for
the
Planet to sustain itself.
The Club of Rome members are closely aligned with the Bilderbergs and the Illuminati. Planet
Earth has
sufficient resources to sustain its population. That is, if we could
stop and
prevent the pollution from the Military Industrial Complex that is also
aligned
with these conscienceless creatures and if we could stop the theft of
our
planet's resources by entities that we have not welcomed here, but who
work hand
in hand with our corrupt, anything but transparent,
governments.
These global elites/shadow government individuals readily propose genocide to reduce
the
population while supporting and championing global industrial giants
like
Monsanto. Try to find and view the video "Food, Inc.." It is very
representative
of the power and the deception of the global elites and of their
stranglehold on
mankind.
This week, Mr. Bill Gates of Microsoft and the Billionaires Club suggested that we need to reduce
the
population by at least one billion people. Bill... Did you and Melinda
volunteer
to lead the lemmings to the ocean?
This planet was not created by the Illuminati, the Bilderbergs, the Club of Rome, Bill
Gates,
Democrats, Republicans, Independents, or any other human individual or
groups.
It was created by God. The rights of all global citizens were not
granted by
governments nor by the rich and powerful.
Our rights to life, liberty, and the pursuit of happiness were granted to us by our Creator,
God. No
man, no rich and powerful group of men, and no government has the right
to take
them from us!
Our Creator said THOU SHALT NOT KILL. These elites defy God with their abortion factories,
with their
orchestrated wars, (FOR PROFIT, FOR NOTHING BUT PROFIT) with their mock
elections (in every nation, at every level)
People of Earth: WE DO NOT ELECT OUR PRESIDENTS OR ANY OTHER GOVERNMENT ENTITY. THEY ARE ALL,
WITHOUT
EXCEPTION, PLACED BY THESE PUPPET MASTERS. Every election result is
DECIDED
beforehand, in the case of Obama, DECADES beforehand.
Look around. The leaders of every nation are moving toward the same goal--The New World Order.
Our
governments have an agenda--the agenda that the
Illuminati/Bilderbergs/Global
elites/Shadow Government prescribe. Is there a national government IN
ANY NATION
that is listening to the people of that nation? How about here in
America? Is
our government listening to us? England? France? Germany? Russia? China?
Japan?
The answer across the planet is NO!
We the People are We the Sheep and we are being blinded and herded into ever shrinking pens. Our
freedoms
are being eliminated at an alarmingly fast rate. The fair and balanced
news that
we have learned to depend on has suddenly begun the same "spin" as the
rest of
the government media.
Why not? Fox News is owned and controlled by a Saudi Prince. The prince has the money--and
the
power--to control what goes out over the airwaves at Fox. The Saudis
don't like
"birthers" or "truthers" here in America. They like having a Muslim in
the White
House. He's not a Muslim? He personally visited the leaders of the Arab
Nations,
didn't he? (Without his wife as that is not allowed of Muslims in Muslim

nations.) Did he visit the leaders of Israel? Or did he send Biden? Is
not
Israel one of America's strongest allies?
Is it any surprise that Fox is dismissing gubernatorial candidate Debra Medina because she is a
"birther?" And if any of you have journalistic tendencies, ask Rick
Perry what
was discussed at the Bilderberg meeting that he attended. Ask anyone who
attends
Bilderberg meetings what is discussed at the meetings.
The two greatest forces on Planet Earth are fear and love. Who is manipulating the population
with fear?
"If we don't do this NOW--this catastrophe will happen. If we don't do
this
NOW--we will have a crisis. ("The white right is setting Barack up for
assassination..." Farrakhan)
Our Creator said: 2 Timothy 1:7 For God hath not given us the spirit of fear; but of power,
and of
love, and of a sound mind.
God gave us the spirit of POWER and LOVE and of a sound mind. Is it any wonder that global
governments are
hard at work to destroy "sound minds?" Ask the question WHO BENEFITS?
Regarding
HD TV. Why was our government determined to have HD TV in every home in
America?
Was it because our benevolent caretaker government wanted us all to have
better
television reception? If you believe this, you are a lost cause
already.
http://justifiedtype.wordpress.com/2009/11/09/nidal-hasan-and-government-mind-control/
America: We need to turn off the televisions--in our home, in our doctor's offices, in our
grocery
stores, in our restaurants, in our big cities, in our shopping malls. We
need to
open up God's word and open up the lines of communication between
ourselves and
God. We need to pray for America, pray for our citizens, pray for the
citizens
of all other nations, and pray for the global elites that seek to
destroy us
all.
They fight us with fear. We must fight them with love. We have plenty of resources here on our
beloved
planet. The people of all nations are willing to share with one another.
We are
willing to love one another. We are willing to protect and defend one
another.
Where is the enemy?
May God our Creator bless us everyone ...
THE MEMBERSHIP ROSTER OF "THE CLUB OF ROME"
http://www.clubofrome.org/eng/people/
ABOUT
http://www.clubofrome.org/eng/about/1/
Programme of the Club of Rome on A New Path for World Development
http://www.clubofrome.org/eng/new_path/CoR_Flyer_090605.pdf
Mission and Activities of the Club of Rome
http://www.clubofrome.org/eng/about/instant_information_docs/Briefing_Note-Mission_and_Activities_of_the_Club_of_Rome.pdf
International Secretariat in Winterthur
http://www.clubofrome.org/eng/cor_news_bank/2/
Consultation on the Future "EU 2020" Strategy
http://www.clubofrome.org/eng/cor_news_bank/21/
Factor 5 – Transforming the Economy through 80% Improvements in Resource Productivity
http://www.clubofrome.org/eng/cor_news_bank/16/
National Associations
http://www.clubofrome.org/eng/national_associations/addresses2.asp

It is clear that the
present path of world development is not sustainable in the longer term,
even if
we recognise the enormous potentials of the market and of technological
innovation. New ideas and strategies will be needed to ensure that
improved
living conditions and opportunities for a growing population across the
world
can be reconciled with the conservation of a viable climate and of the
fragile
ecosystems on which all life depends. A new vision and path for world
development must be conceived and adopted if humanity is to surmount the

In response to this intellectual and practical
challenge, the Club of Rome will undertake a three year programme on "A
New Path
for World Development" so as to achieve a better understanding of the
complex
challenges which confront the modern world and to lay solid foundations
for the
action which must be taken to improve the prospects for peace and
progress.


The Programme will not only engage decision makers and experts and
provide them with feasible proposals for action but will also engage
with the
public through a variety of channels. It will be in part, an "open
source"
programme. It will undertake only a limited amount of original research,
drawing
on the wide array of available information and research in progress. It
will be
implemented in close collaboration with partner organizations, providing
a
framework through which their ideas and contributions can be integrated.
This
will increase the credibility and impact of the efforts of the Club
itself.


The Programme will focus on five "clusters" of related issues within the
overall conceptual framework of A New Path for World
Development:


2. Globalisation: This cluster relates
interdependence,
distribution of wealth and income, demographic change, employment, trade
and
finance. Rising inequalities and imbalances associated with the present
path of
globalisation risk the breakdown of the world economic and financial
systems;

4. Social Transformation: This cluster relates social change,
gender
equity, values and ethics, religion and spirituality, culture, identity
and
behaviour. The values and behaviour on which the present path of world
development is based must change if peace and progress are to be
preserved
within the tightening human and environmental limits;

5. Peace and Security: This cluster relates justice,
democracy, governance, solidarity, security and peace. The present path
of world
development risks alienation, polarization, violence and conflict; the
preservation of peace is vital in itself but is also a precondition for
progress
and for the resolution of the issues which threaten the future.

Within
each of these clusters, the issues are strongly linked: thus each group
constitutes a coherent and manageable field for analysis. The links
between the
clusters will be accounted for as the programme proceeds, within the
overall
integrating framework of A New Path for World Development.

The Club will
convene five small high-level expert meetings successively over the
three year
period, 2008 - 2010, one on each of the clusters of issues identified
above.
Each meeting should produce a clear statement on the issues, risks and
opportunities ahead with an outline of the principal strategies and
measures
required in response. As the Programme proceeds, the insights and
knowledge
gained from each meeting will provide clear perspectives of constraints
and
opportunities as the context for the next meeting. By recognizing such
linkages,
the knowledge acquired will be cumulative and will produce innovative
insights
as the Programme proceeds.

In relation to each cluster of issues, a
private, web-based research network will be established through which
the
participants in the expert meetings, together with additional experts,
can carry
on a process of dialogue and research to develop a deeper understanding
of the
issues and to elaborate specific recommendations and proposals.

Each of
these five clusters of issues will be the focus of a specific area of
information and analysis on the Club of Rome website. As the analysis
proceeds
and knowledge increases, each area will accumulate research results, a
strengthening data base, a deepening understanding of the issues and
their
complex interconnectedness and a growing number of proposals for
integrated
strategy and action.

As work proceeds on the five clusters, a parallel
effort will focus on developing a better conceptual and practical
understanding
of the world systems within which they are linked and embedded. This
will help
to understand the linkages between trends, issues and actions and to
identify
the drivers of global change. The Programme will in this way recognize
the
immense complexity of world affairs.

A dedicated research network will
focus on the issue of systems integration, including systems thinking
and
systems linkages and systems dynamics modelling. These networks will be
supported by the Secretariat and accessed through the Club's website.

In
late 2010 it is planned that the concluding "International Forum of the
Club of
Rome" will be held to integrate the final outputs of the expert
meetings, of the
research networks and of the related activities by all the elements of
the Club
and its partner organizations, leading to coherent conclusions and
recommendations and to a major Final Report.