How the INCOME tax deprives Amercan citizens of their first amendment rights:

of their first amendment rights:

SHOULD ANY BOYCOTT BE PROTECTED AS

FREE SPEECH UNDER THE FIRST AMENDMENT?

Do We, the People, have the ability to

As citizens, we need to reclaim the

Power of the Purse

through the ability to BOYCOTT them.

If We, the People, do not

TAKE BACK THAT POWER

will never respect us,

...they will only continue

The damned fools in Washington are all

frantically debating how they should

"the elephant in the room",

Just who do those damned fools in D.C.

think they are fooling?

They keep talking about how a reduction

in INCOME tax rates will

A reduction in the rate which they are stealing

It is a temporary abatement of the rate at which they rob you.

If a slight reduction in the INCOME tax rate

will stimulate the economy, it follows that the

ABOLITION of the INCOME tax, altogether, will unleash the

The truth is that taxation of INCOMES

would effectively kill any economy.

It follows that zero ( 0 ) tax on INCOMES

would allow any economy to grow

according to the productivity of its citizenry.

would afford the government adequate funding

but retain for that citizenry

the Power of the Purse,

through the Power to Boycott.

The Founding Fathers knew this.

They never would have dreamed of

having the audacity to even propose

This is why politicians will always

re-direct the conversation away

from any thought of this.

They know that when they control

the methods of taxation

they remain the masters,

and the citizenry, the servants.

The ability of the government to

through the criminal, unconstitutional

is jealously guarded by the elite.

...One needs only to look

at the recent Supreme Court decision

Five of the nine 'wizards' there

to impose it on the rest of us

This is just another example

of how an arrogant government

easily slips into the role of TYRANT.

...it is our Liberty that's at stake.

" Congress shall make no law respecting an establishment of religion, or prohibiting the free exercise thereof; or abridging the freedom of speech, or of the press; or the right of the people peaceably to assemble, and to petition the Government for a redress of grievances. "

•    an establishment of religion, ensuring that there is no prohibition on the free  exercise of religion,
•    abridging the freedom of speech,
•    infringing on the freedom of the press,
•    interfering with the right to peaceably assemble,
•    or prohibiting the petitioning for a governmental redress of   grievances.

It was adopted on December 15, 1791, as one of the ten amendments that constitute the Bill of Rights. The Bill of Rights was originally proposed to assuage Anti-Federalist opposition to Constitutional ratification.


Initially, the First Amendment applied only to laws enacted by the Congress, and many of its provisions were interpreted more narrowly than they are today. Beginning with Gitlow v. New York (1925), the Supreme Court applied the First Amendment to states—a process known as incorporation—through the Due Process Clause of the Fourteenth Amendment. In Everson v. Board of Education (1947), the Court drew on Thomas Jefferson's correspondence to call for "a wall of separation between church and State", though the precise boundary of this separation remains in dispute.


Speech rights were expanded significantly in a series of 20th and 21st-century court decisions which protected various forms of political speech, anonymous speech, campaign financing, pornography, and school speech; these rulings also defined a series of exceptions to First Amendment protections.The Supreme Court overturned English common law precedent to increase the burden of proof for defamation and libel suits, most notably in New York Times Co. v. Sullivan (1964). Commercial speech, however, is less protected by the First Amendment than political speech, and is therefore subject to greater regulation.


The Free Press Clause protects publication of information and opinions, and applies to a wide variety of media. In Near v. Minnesota (1931) and New York Times v. United States (1971), the Supreme Court ruled that the First Amendment protected against prior restraint—pre-publication censorship—in almost all cases.


The Petition Clause protects the right to petition all branches and agencies of government for action.


In addition to the right of assembly guaranteed by this clause, the Court has also ruled that the amendment implicitly protects freedom of association

Freedom of speech is the right to articulate one's opinions and ideas without fear of government retaliation or censorship, or societal sanction.


The term freedom of expression is sometimes used synonymously, but includes any act of seeking, receiving and imparting information or ideas, regardless of the medium used. The right to freedom of expression is recognized as a human right under article 19 of the Universal Declaration of Human Rights and recognized in international human rights law in the International Covenant on Civil and Political Rights (ICCPR). Article 19 of the ICCPR states that "everyone shall have the right to hold opinions without interference" and "everyone shall have the right to freedom of expression; this right shall include freedom to seek, receive and impart information and ideas of all kinds, regardless of frontiers, either orally, in writing or in print, in the form of art, or through any other media of his choice". Article 19 additionally states that the exercise of these rights carries "special duties and responsibilities" and may "therefore be subject to certain restrictions" when necessary "[f]or respect of the rights or reputation of others" or "[f]or the protection of national security or of public order (order public), or of public health or morals".


Freedom of speech and expression are not absolute, and common limitations to freedom of speech relate to libel, slander, obscenity, pornography, sedition, incitement, fighting words, classified information, copyright violation, trade secrets, non-disclosure agreements, the right to privacy, the right to be forgotten, public security, and perjury.

Justifications for such include the harm principle, proposed by John Stuart Mill in On Liberty, which suggests that: "the only purpose for which power can be rightfully exercised over any member of a civilized community, against his will, is to prevent harm to others." The idea of the "offense principle" is also used in the justification of speech limitations, describing the restriction on forms of expression deemed offensive to society, considering factors such as extent, duration, motives of the speaker, and ease with which it could be avoided. With the evolution of the digital age, application of the freedom of speech becomes more controversial as new means of communication and restrictions arise, for example the Golden Shield Project, an initiative by Chinese government's Ministry of Public Security that filters potentially unfavorable data from foreign countries

A boycott is an act of voluntarily abstaining from using, buying, or dealing with a person, organization, or country as an expression of protest, usually for social or political reasons. The purpose of a boycott is to inflict some economic loss on the target, or to indicate a moral outrage, to try to compel the target to alter an objectionable behavior. Sometimes, a boycott can be a form of consumer activism, sometimes called moral purchasing.Boycotts are a form of freedom of expression, which is free speech.  When a similar practice is legislated by a national government, it is known as a sanction.  Our government boycotts other governments routinely, such as Cuba, Venezuela, Russia, North Korea, etc.  THE SANCTION TOOL, OR BOYCOTT, IS VERY EFFECTIVE FOR PROTESTING, OR MODIFYING THE BAD BEHAVIOR OF ROGUE REGIMES.

Freedom of Speech and Freedom to Petition government are an aspect of economic freedom which includes the right NOT to purchase goods or services. Tax on INCOMES nullifies citizens' rights to boycott corrupt, incompetent government. Their hard-earned money is withheld from them as earned, extracted by employers (who must comply), and sent to the labyrinth of the federal government, which has spent itself into the oblivion of virtual bankruptcy. Recently, they papered-over their obvious thievery with worthless paper Federal Reserve "Notes" and called it "Quantitative Easing".  ( Meaning, they printed a colossal quantity - trillions - of paper notes, which eased the political heat on their sorry asses, hence,  " QUANTITATIVE   EASING " ) . To the elites in Washington, the printing press is far superior to a magic lantern. They literally printed their way out of their own criminality, and managed, once again, to deceive our citizens, whom have been "dumbed down" for at least two generations.

The Founding Fathers knew that when the citizenry held the "Power of the Purse" (which inherently implies citizens' power to DENY monetary resources as well as the power to grant them), that the governing class would ultimately be beholden to that citizenry, and stay attentive to the Will of the People. The INCOME tax eviscerates that essential citizen right, and has given the power of the purse over to the government, denying that power to the people.

Of course, all rational thinkers acknowledge the necessity for the government to raise revenues through taxation. But it should only derive its revenues from a CONSUMPTION tax ( sales tax ), not a confiscatory tax on the citizens' hard-earned income.

If the INCOME tax were abolished, and replaced with a CONSUMPTION tax, then the People would have the power to boycott corrupt or incompetent government. They would hold the ultimate Power of the Purse, and would be the masters of government, which would dutifully become the servant.

The era of arrogant government would come to a very abrupt end, and it would become a humble government that once again respects the Constitutional Rights of its citizenry. 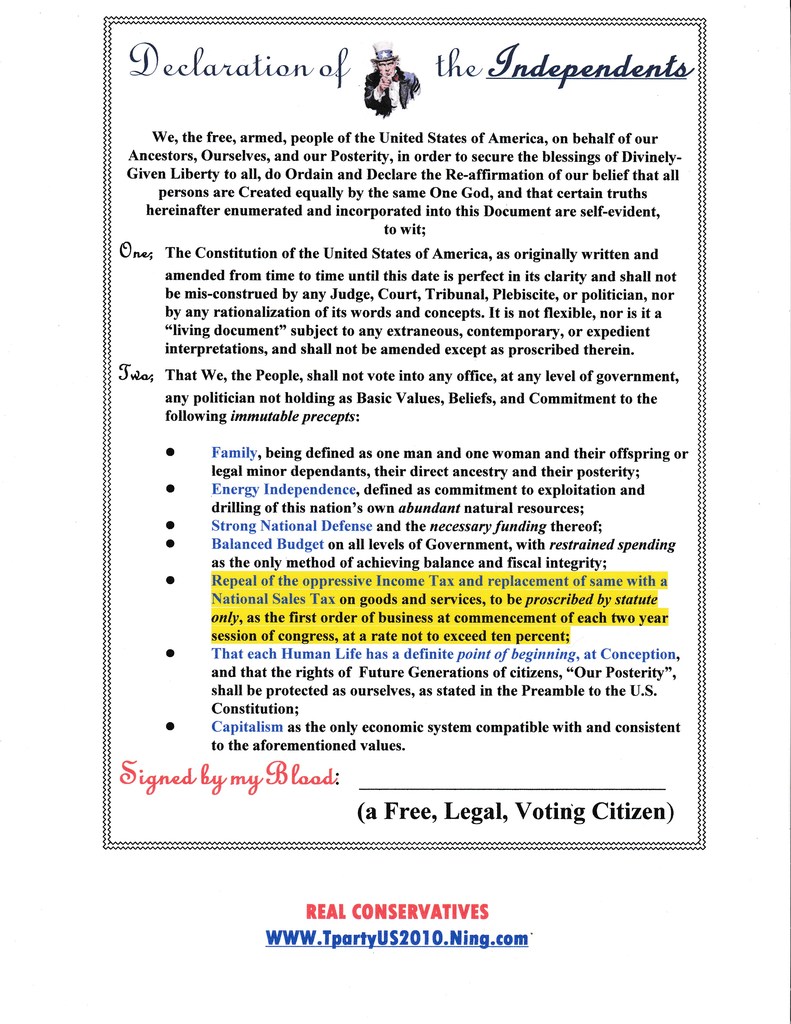 The United States Constitution has been our guiding document for more than 200 years.

There have been additions and deletions over that time.

We arrive at 2016 with an election of a new President and may I say a new kind of President.

Although President Trump ran as a Republican, he is leading more like an independent.

Now in 2017 after only 9 months in office he has both political parties angry at each other as well as angry with him.

This is a good thing.

What has occurred as a result of this animus is an expose' of the huge amount of corruption with which our government operates. In fact We the People are convinced there exists a "deep state" created and installed during the last 8 years of the Democrat Party with a tacit position of the Republican Party leadership (RINOs). This conditional control of politics and the power of lobbyists in Washington, including the media, is like a soft coup of President Trump or ANY individual who attempts to make a change favoring We the People.

We the People no longer run Washington DC and our country.

We the People need to wrestle control away from the political class in Washington DC.

Part of winning our country back requires we make changes.