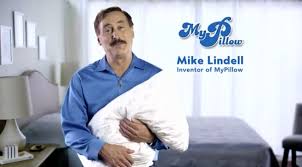 Mike Lindell, inventor of MY PILLOW

...he confronted his darker reality

and put it to sleep

"...With every life comes a story.

Success is an elusive quality that has been studied, analyzed, indexed and catalogued by authors and scholars throughout the ages. It is believed that the so-called elite among us are privy to some deep, esoteric secret that has propelled them to the highest echelons of society and wealth, and that a certain wisdom can be gained from the telling of their stories through various media - books, CD’s, tapes, movies, song and legend. Mike Lindell, Bill Gates, Steve Jobs, MLK, Donald Trump, Thomas Edison, Henry Ford, and other notable, and sometimes notorious, dignitaries are featured in all sort of lore that profess to unlock those deep, esoteric secrets that made them “Made”, and the mere recanting of their stories, which further serve to enhance their fortunes, are supposed by all to inspire others to duplicate their successes. Few of these icons place very much tribute to the role that luck or fortune had in their achievements, attributing the totality of their successes to “hard work and persistence”. And they are, for the most part, correct in that analysis.

All of these factors are necessarily present in any success story, but what attention has been paid to the causes of failure? Is it not just as prescient to consider the wisdom of learning the underlying causes of failure, which almost inevitably lead in society to poverty, and in many cases, crime, disease, and tragic early death?

Is there a deeper, more profound secret that lurks in the bowers of desperate poverty? Is there much wisdom, of the kind that should be identified as to what should be avoided, to be found in the hearts, minds, memories and folklore of the street people...”the down and outs”, who dwell in the cold, windy caverns of our cities’ streets? Is there a Darker Reality that hovers, furtively, waiting for targets of opportunity to come into its insatiable range of vision...waiting patiently for its next prey? Shouldn’t we be questioning the very roots of its evil, striving to understand it, so that we can properly recognize it, and avoid it?

Are we running from the danger, thankful only that our station in life is not as low as those bums, ignoring the very real possibility that we, as fellow human beings, are just as vulnerable, just as fragile, as they? Are we ‘whistling past the graveyard’, scurrying away from the devastation that has overcome some of our fellow men?

Are there lessons to be learned? Learned from the wisdom that these derelicts have acquired from their own lives experiences? Are we ignoring the epidemic of misery we see, increasingly frequently, as a defense mechanism, somehow comfortable in the belief that ignoring it will make it go away?

These questions must be addressed by someone....and soon."

Michelle Athens, from her book, "The Wisdom of the Lost"